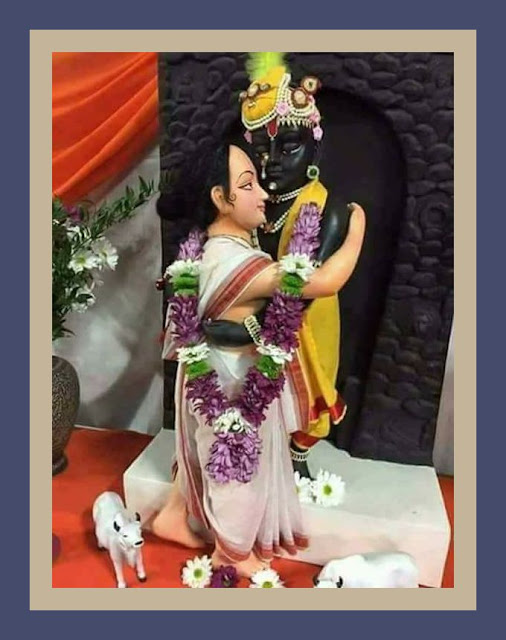 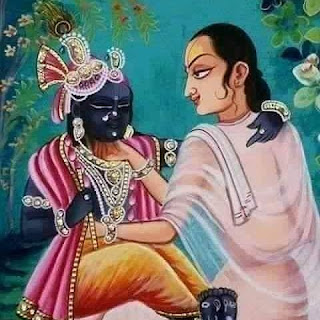 Vallabha Bhaṭṭa was a great learned scholar of Vaisnavism. In the beginning he was very much devoted to Sri Caitanya Mahaprabhu, but since he thought that he could not receive proper respect from Him, he later joined the Visnu Svami sect and became the acarya of that sect. His sect is celebrated as the Vallabhacarya - sampradaya. This sampradaya has had great influence in Vrndavana near Gokula and in Bombay. Vallabha Bhatta wrote many books, including a commentary on Srimad-Bhagavatam called Subodhini-tika and notes on the Vedanta-sutra in the form of an Anubhasya.

He also wrote a combination of sixteen short works called Sodasa-grantha. The village where he was staying — Adaila-grama, or Adeli-grama — was near the confluence of the rivers Ganges and Yamuna, on the other side of the Yamuna from Prayaga, about one mile from the river. A temple of Lord Visnu there still belongs to the Vallabha-sampradaya.

Vallabha Bhatta was originally from a place in southern India called Trailanga. There is a railway station there called Nidadabhalu. Sixteen miles from that station is a village called Kankadabada, or Kakunrapadhu. A learned brahmana named Laksmaṇa Diksita used to live there, and Vallabha Bhatta was his son. There are five sections of the brahmana community of Andhra Pradesh, known as Bella-nati, Vegi-nati, Muraki-nati, Telagu-nati and Kasala-nati. Out of these five brahminical communities, Vallabhacarya took his birth in the community of Bella-nati in the year 1400 Śakabda Era (A.D. 1478).

According to some people, Vallabha Bhattacarya’s father took sannyasa before Vallabha’s birth, and he returned home to take Vallabhacarya as his son. According to the opinion of others, Vallabhacarya was born in 1400 sakabda era on the Ekadasi day of the dark moon in the month of Caitra, and he took his birth in a brahmana family surnamed Khambhampatibaru. According to this account, his father’s name was Laksmana Bhatta Diksita, and he was born in Campakaranya. In someone else’s opinion, Vallabhacarya appeared near the village named Canpa-jhara-grama, which is near a railway station named Rajima in Madhya Pradesh.

After studying for eleven years at Varanasi, Vallabhacarya returned home. On his return, he heard that his father had departed from the material world. Keeping his brother and mother at home, he went to the banks of the river Tuagabhadra, to a village called Vidyanagara, where he enlightened Krsnadeva, the grandson of King Bukkaraja. After that, he traveled throughout India thrice on trips lasting six years each. Thus he passed eighteen years and became victorious in his discussions of revealed scripture. When he was thirty years old, he married Mahalaksmi, who belonged to the same brahmana community as his. Near Govardhana Hill he established a Deity in the valley. Finally he came to Adaila, which is on the other side of the Yamuna from Prayaga.

Vallabhacarya had two sons, Gopinatha and Vithṭhalesvara, and in his old age he accepted the renounced order. In 1452 Sakabda Era (A.D. 1530), he passed away from the material world at Varanasi. His book known as Sodasa-grantha and his commentaries on the Vedanta-sutra (Anubhasya) and Śrimad-Bhagavatam (Subodhinī) are very famous. He wrote many other books besides.

Sri Caitanya Mahaprabhu selected His residence beside the confluence of the Ganges and the Yamuna, a place called Triveni. The two brothers — Rupa Gosvamī and Sri Vallabha — selected their residence near the Lord’s.

Although the Lord restrained Himself externally, ecstatic love raged within. There was no checking that. Vallabha Bhatta was astonished to detect this. Thereafter, Vallabha Bhatta invited Sri Caitanya Mahaprabhu for lunch, and the Lord introduced the brothers of Rupa and Vallabha to him.

From a distance, the brothers Rupa Gosvamī and Sri Vallabha fell on the ground and offered obeisances to Vallabha Bhatta with great humility. When Vallabha Bhattacarya walked toward them, they ran away to a more distant place. Rupa Gosvamī said, “I am untouchable and most sinful. Please do not touch me.”

Vallabha Bhattacarya was very much surprised at this. Sri Caitanya Mahaprabhu, however, was very pleased, and He therefore spoke to him this description of Rupa Gosvamī. Sri Caitanya Mahaprabhu said, “Don’t touch him, for he belongs to a very low caste. You are a follower of Vedic principles and are a well experienced performer of many sacrifices. You also belong to the aristocracy.”

Hearing the holy name constantly vibrated by the two brothers, Vallabha Bhattacarya could understand the hints of Sri Caitanya Mahaprabhu. Vallabha Bhattacarya said, “Since these two are constantly chanting the holy name of Krsna, how can they be untouchable? On the contrary, they are most exalted.” Vallabha Bhattacarya then recited the following verse: “ ‘My dear Lord, one who always keeps Your holy name on his tongue becomes greater than an initiated brahmana. Although he may be born in a family of dog-eaters and may therefore, by material calculation, be the lowest among men, he is still glorious. This is the wonderful effect of chanting the holy name of the Lord. It is therefore concluded that one who chants the holy name of the Lord should be understood to have performed all kinds of austerities and great sacrifices mentioned in the Vedas. He has already taken his bath in all the holy places of pilgrimage, he has studied all the Vedas, and he is actually an Aryan.’ ”

Sri Caitanya Mahaprabhu was very pleased to hear Vallabha Bhatta quoting from sastra about the position of a devotee. The Lord praised him personally, and, feeling ecstatic love of Godhead, began to quote many verses from sastra. Sri Caitanya Mahaprabhu said, “ ‘A person who has the pure characteristics of a brahmaṇa due to devotional service, which is like a blazing fire burning to ashes all the sinful reactions of past lives, is certainly saved from the consequences of sinful acts, such as taking birth in a lower family. Even though he may be born in a family of dog-eaters, he is recognized by learned scholars. But although a person may be a learned scholar in Vedic knowledge, he is not recognized if he is an atheist.

For a person devoid of devotional service, birth in a great family or nation, knowledge of the revealed scriptures, performance of austerities and penance, and chanting of Vedic mantras are all like ornaments on a dead body. Such ornaments simply serve the concocted pleasures of the general populace.’ ”
When he saw the Lord’s ecstatic love, Vallabha Bhattacarya was certainly very much astonished. He was also astonished by the Lord’s knowledge of the essence of devotional service, as well as by His personal beauty and influence. Vallabha Bhattacarya then put Sri Caitanya Mahaprabhu and His associates aboard a boat and took them to his own place to offer them lunch.