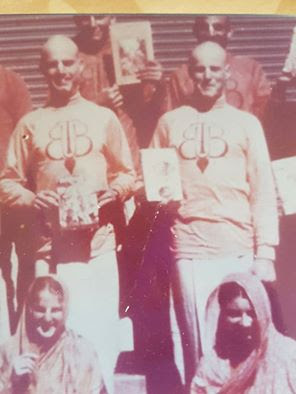 I offer my most respectful obeisances at the holy feet of my godbrother Gopinath Acarya prabhu who left his body yesterday.

Gopinath is pictured at the top of this photo, taken in 1974 in Melbourne Australia, holding a Caitanya Caritamrta.

He joined in 1973 at the age of 16 years and immediately dedicated his life to pleasing Srila Prabhupada through book distribution. Later on, convinced of the necessity of self sufficient farming communities by the constant reading of those same books, he dedicated himself to the cows and bullocks of New Govardhana. He epitomised simple living and high thinking being austere, humble and respectful and maintaining his strong sadhana in all circumstances of life.

He could also be outspoken when expressing his realisations of how we should all implement Srila Prabhupada's instructions and predictably this put him at odds with management. Those men never had the vision to see what an extrordinary mahatma Gopinath Acarya was and banned him from the very land he had lovingly tilled with bullocks for many years.

He passed away prostrate on Mother Earth on land adjacent to New Govardhana.

I feel privileged and honoured to have had his association. By the time i joined the temple in 1973, Gopinath had already sold thousands of pieces of transcendental literature. He was very strict in the way he followed the process of devotional service and was sometimes referred to as "fanatical". I have what i consider a humorous story in this regard.

After Srila Prabhupada's visit to Australia in 1974, Buddhimanta prabhu, Gopinath Acarya and i were sent off to the top of Australia, Darwin to distribute books. It was a huge new area for distribution and Laksmi collection. However, we had to leave earlier than expected because of problems with the council. (Shortly after our departure, Darwin was wiped out by Cyclone Tracy).

On the drive back south, Gopinath was driving the van when a wild horse ran in front causing the van to be overturned. I was thrown to the floor of the van and boxes of books were falling all over me. Completely disregarding what would have been his own shock at the incident, Gopinath, though a strict bramacari, immediately came to my aid and helped me out of the wreckage to the side of the road.

I cannot tell all the details here but to cut a long story short, Buddhi stayed with the van to take care of things and Gopinatha and i got a lift into the town of Katherine ahead with a passing motorist.

A few hours later, we are freshly showered and sitting at the dining table of a local pastor and his family who had given us shelter, despite the fact that with our devotional clothing and tilak we must have seemed like total aliens to them.

The wife of the pastor had prepared some boiled vegetables for us while the family had what would have been their more normal meal. This would have been very difficult for such a strict follower as Gopinath - to be sitting at a table where meat was being consumed- but he told me later that he felt Krsna had arranged the situation for the spiritual benefit of this family.

After the pastor had led a prayer of thanksgiving for the meal, Gopinath asked if he could say a prayer also to which the pastor agreed. Gopinath first gave a short lecture to those present on how everything belongs to the Supreme Lord and how foodstuffs should be offered to Him with love and devotion. This lecture included quoting sanskrit verses from Bhagavad Gita -patram puspam etc -with explanations of what were proper foodstuffs to offer. He also explained that chanting the Hare Krsna mahamantra was the Yuga Dharma in the Age of Kali.

He then placed a book with photo of Srila Prabhupada on the table behind the bowl of boiled vegies and recited all the prayers for offering three times with great devotion. He then pulled out his brahmin thread and in full silent concentration, while all present respectfully stayed still and also silent, chanted not only the first line of the Gayatri mantra but the entire sequence of prayerful meditations.

After this we all dined together- in complete silence.

Now i dont know exactly what would have been going through the minds of our gracious hosts, but i feel confident that never in their entire lives would they forget the night that Hare Krsnas came to dinner.

With great sadness i mourn the passing of Gopinath Acarya. He was unique. The world will not see the likes of him again. His auspicious next destination is surely guaranteed. May the world and especially the association of devotees never forget him.

[PADA: He was banned by the GBC authority? Seems like a pattern? Apparently he was living with another exiled devotee. ys pd]