[PADA: Dayalu Nitai's HKC Jaipur program seems to be making yet another artificial controversy. He is apparently complaining about the bona fides of the "Original McMillan" edition of the Bhagavad Gita, -- which is the SAME version which I purchased when I first became a devotee. The current pocket edition was condensed somewhat, but its still the original text.

Actually, the original "Blue cover Gita" was even more condensed to make the printing more affordable. So this is another problem itself, if everyone disagrees over which edition can be printed, then it reduces the funds available for printing overall. The basic rule is, the more copies of a book that are printed, the cheaper each copy becomes, so its a good idea for everyone to agree which book is acceptable to print.

At the same time, a devotee who is currently distributing FULL COPIES of digital versions of ALL the original books complains to PADA that he was banned and kicked off the HKC property. OK so the actual people who are distributing the actual FULL VERSIONS of original books are the bad guys? Dayalu Nitai should be supporting the distribution of Srila Prabhupada's original books, not attacking and banning the devotees managing these programs? How did you guess, the GBC folks also create problems for our original books devotees.

Of course, the HKC Jaipur folks and their hero Prahlad das said that PADA is bad, apparently because -- we helped sue the GBC for the legal rights to these original books. Yep, Jayadvaita's bogus Gita needs all the legal rights, not the SRILA PRABHUPADA originals.

Why are they opposed to PADA, when we were among the first to say we should print original books? Prahlad even says we need to kick PADA off the internet, so he can then help the bogus gurus rule the world with -- bogus gurus and Jayadvaita's books? And HKC said, Prahlad is their "senior" man?

I really do not know what is going on there for certain, but one thing is certain, they are attacking many others who are distributing original edition books and they are also attacking those who sued the GBC to get the rights to print the original editions. HKC Jaipur should issue an official statement on which editions they support, and which they do not support, and why.

Anyway, I wish these guys would simply cooperate with the other Vaishnavas. PADA's idea is, we should all cooperate and all distribute original edition books, and we should not make an artificial wall of competing schismatic groups. And if we can all agree to print a particular edition, everyone should combine to support that and bring the printing costs down. Of course HKC has to be given credit for distributing books there, that is nice, but they should try to be more on board with other projects that are doing these same things. Of course these same HKC folks created mass confusion when they sent everyone links to listen to Bhakta das and Hari Sauri, big supporters of the debauchee guru's program.

Here is another report on these guys:

As known to the Vaishnav community that Dayalu Nitai Sundar Das has been protesting against the original pocket sized Bhagavad-gita of Srila Prabhupada for many years. He openly called for a boycott and protest against the book and labelled it as an offense to the lotus feet of Srila Prabhupada. He said that this edition is bogus and fake for the following reasons:

1) No Sanskrit verses
2) No proper index

There were other alterations done to make it small and concise, so that it could be published in its pocket form, but Dayalu was ruthless in criticizing the edition calling it 'altered' and different from Srila Prabhupada's standard Gita.
Now, this same joker named Daualu Nitai Sundar Das alias Dharmesh Sharma is seen distributing these same books in large numbers and is sharing the photos of his book distribution with everyone.

There is no wonder that this man has stooped very low. The point to be noted here is that Dayalu is a highly score-conscious and records number conscious person who is doing book distribution just to satisfy his ego and has been projecting himself as the no.1 devotee while competing with Akshayapatra, GIVE, ISKCON etc. which are the other groups preaching over there.

Dayalu claims that his group distributed 16,385 Gitas in marathon 2016, just to boast that he is the number one and way ahead of other groups !

1. Why does Dayalu shows no signs of spiritual advancement though he has 'scored high'?

2. Why he does not mentioned that he gave many of these books for free, getting them sponsored by third parties?

3. Why he eats only dry-fruits and makes his 'poor disciples' do all the hard work? 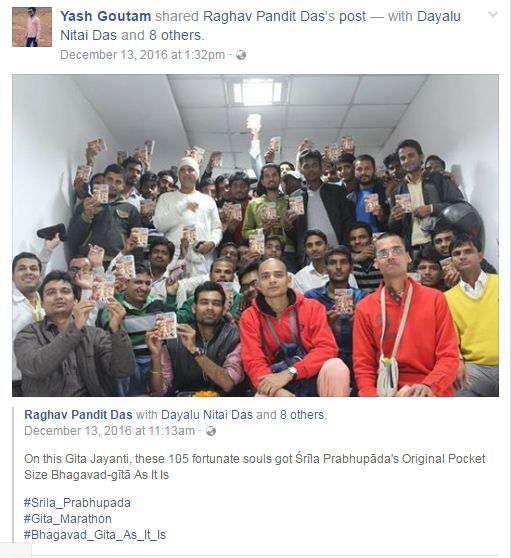