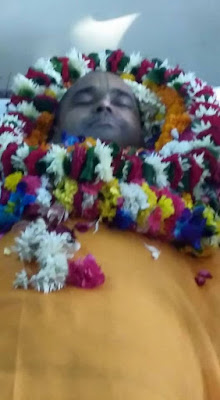 [PADA: He was born in 1964, that makes him fairly younger man. I am not sure what caused his departure (a heart attack?).

What surprises me all the time is -- how all these India (GBC) goswamis are hitching their spiritual wagon to the GBC's guru program's donkey, which states that acharyas are often fallen and debauchees. Why are they attracted to that program at all?

And why don't they instead join us -- to promote the idea that acharyas are pure and not fallen? For that matter, how come our old friends like Ravindra swarupa, Gunagrahi, Rupanuga, Bhakta das and many other of our God brothers are attracted to this GBC guru program, which promotes the idea that God's gurus, messiahs, successors and parampara members are usually, fallen and degraded?

Why would anyone want to join a program which openly states that God's gurus and successors are often fallen fools who are chasing skirts, dope, money etc.? I just do not get it. I have to admit, it also seems a little strange to me that a younger person in apparent good health would suddenly die like this.

Of course dying in the holy land is nice, but it may not be sufficient in itself to recover fully from promoting these false acharyas. ys pd

The passing away of HH Gaura Krishna Maharaja happened very suddenly. Just a few days ago he was looking perfectly healthy and was walking along nicely. Even yesterday he was just the same, looking in perfect health. His departure just happened suddenly this morning.

The only plan to be made is how to execute perfect Krishna consciousness so that when we have to leave our body, it will be a just transfer from one environment to another. The material body is fragile, it's never under our control, that's why it can be taking away at anytime. A Vaisnava should therefore plan to die in order to live. He took sanyasa earlier this year.