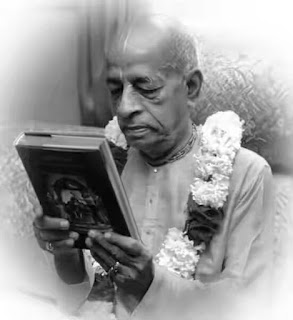 
A Tribute to His Divine Grace A.C. Bhaktivedanta Swami Srila Prabhupada on His Disappearance Day, 2015.

Dear Srila Prabhupada,
Please accept my most humble obeisances to your lotus feet
on this, your day of Disappearance, 2015

Dear Srila Prabhupada, alas
You left us too soon…as those who were in your room
Found a reason to block your instructions. ISKCON damaged.
Now the material world is hell bent, headed towards destruction.
We need you now more than ever, when you left, we were left with
broken hearts

We miss you, dear Srila Prabhupada, as we have seen
what happened when a pure devotee leaves, is not all
so pure and clean or so right… you left us in flight. Now is dark.
Now day in ISKCON has become night and we live with
broken hearts

Some say you're gone, but they are so very wrong
You said, ''I live forever in my books''
which you said should stay as they are, like ISKCON
without changes. But changes came, just like the rain
therefore we have broken hearts

You told us to cooperate with each other, but now
CHANGE, we can't even call the matajis 'Mother'
another change, another point of light put out
by those you trusted in and now throughout
we have broken hearts

Your Temples in America and the UK/Canada were
meant for the locals, for one and all... but now they
are Hinduized and unattended by most. It makes
your Temples in the West look like the house of a ghost.
That's left us with more broken hearts

Prabhupada, your Divine Grace, you're now in a better
place, probably away from the fallen conditioned souls?
At Lord Krsna's feet and your beloved departed disciples
Taken them from the harsh Kali Yuga's vicious cycles
We miss you and them with our broken hearts

Someday will come we will meet again and I ask then
to help you once again, to push on Lord Sri Caitanya's Mission
We ask your permission, just your mercy to preach strongly
without deviations and caring for ''ALL'' who surrendered to you.
Then we will have happiness and live without
broken hearts

Thank you, Srila Prabhupada, for everything in Krsna Consciousness