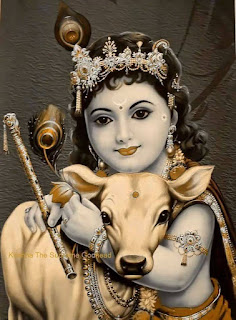 Russian Woman: So now what? What you can do about that MP Das PRABHUJI, besides just sitting behind the PC screen, receiving and sharing gossip like others PRABHUJI? You claim to be senior ritviks but all you are doing is just talking, calling names, and writing on facebook. The best thing is to keep your mouth shut until you have something in your own hands to show a better example.

What you are waiting for? Are you all waiting for Madhu Pandit Dasa to go to your country with a lot of money and build a Ritvik temple for your guys? Or just give $ 5,000,000 from Bangaluru temple to start food for life in America?

Madhu Pandit Dasa Maharaj is a very intelligent person, he gets things done practically, which you guys seem to never do. Why don't you guys go to work and build your own Ritvik's temples? But what happens? No spiritual power? How you will get power by sitting the whole day just gossiping on facebook?

PADA: Right, it seems that now some ISKCON leaders can promote "same sex marriage" and many similar deviations, and there are little or no internal management controls to curb that person. Then again, so many other deviations have gone on with little or no controls from the GBC for decades. Thus, all sorts of problems if not criminal actions have gone on, and in the book "Monkey On A Stick" they call the GBC "the gutless wonders" for having hardly any ability to curb even smaller deviations.

In sum, its a failed "board of managers" who self-apparently -- cannot manage their society. Or its what some people would call -- a failed state. It seems the main person holding the GBC accountable on any practical level is Madhu Pandit das and his lawsuit to challenge their "out of control" ways.

Needless to say, Madhu Pandit das is now being criticized by different parties for trying to reign in the bogus GBC, but this problem is not new, when me and Sulochana were writing in the 1980s, many people said to us things like: "Your writing is too inflammatory! You are offending great devotees like Kirtanananda! Don't offend the Gaudiya Matha! Your spelling and punctuation are wrong!" -- and so on and so forth. In short, lots of "editorial advice" from all directions.

And our answer to these critics all along has been, "OK fine, then start your own publication, your own newsletter and so on." Well jeepers, we cannot do that! Neither would most of these handyman helpers give us funds to publish our papers. So we had to study and research our own documents, collect documents, sort documents, discuss documents, publish documents, fund our own document's being printed, distribute our own documents, pretty much all on our own. Most of these "armchair advisors" were not helping much, nor producing an alternate source of information.

Yet, at some point, when the pirates are taking over your ship, simply giving more and more "armchair advice" to the few people opposing the pirates is not going to solve much of anything. Same thing happens when there is a forest fire, two or three guys with a garden hose won't be able to put it out, period. A much bigger group effort is required. Then again, when there is only a few guys with a garden hose going after the big fire, they can die in the effort to contain the fire, because they are severely underpowered and easily overwhelmed.

Thus, more people would need to take their own direct actions themselves to be an effective counterpoint, by either helping us, or getting something else done in a better fashion than we were doing. For that matter, alternate sources of information are still needed since many people are still convinced the GBC gurus are divine, were appointed as gurus, and they are the successors to Krishna.

The main person who has emerged recently with any meaningful organizational skills to counter the "mission drifted" GBC gurus is -- Madhu Pandit das, which is fairly self evident to just about everyone. Of course, as soon as any sort of infrastructure appears -- which is going to emphasize Srila Prabhupada as the acharya -- all sorts of people attack that process, including many of the so-called Prabhupadanugas.

For example oh no! Madhu Pandit is not making a farm in Vrndavana!

OK fine, but are you critic folks going to be making a farm in Vrndavana yourselves? Well nope, they will never do that, at least not in this kalpa. They just want to "manage" other's programs over there in Vrndavana, and not start their own program.

So Madhu Pandit das has the same types of problems that Srila Prabhupada has had, and we have had, all sorts of armchair advisors who seem to only be able to criticize, but not make much of an alternate, what to speak of bigger and better counter process. Thus the people who were most critical of me and Sulochana's writings, -- have basically not not written much anything of value themselves ever since. These critics just wanted to manage our writings while not doing any actual work themselves.

And this is basically the same thing that happened with the books changes issue. Some of our Prabhupada allied folks said, we should not sue the GBC over the changed books right now -- when we should be making compromise for working with these GBC's gurus. OK except, we said at the time, such deal making would NOT work ever, and we have never seen any deal ever made between the GBC and our friends ever since. That means the deal making idea was a non-starter.

Worse, we would have put the book changes lawsuit on hold forever, and got nothing in return? How does that help? Better to say, we think PADA is too heavy duty, but we are interested in making a compromise deal, so let us try that, but we are not going to interfere with PADA's program of making a legal challenge.

In other words, lets combine our efforts, let PADA continue with the writing and legal approach program -- which is working at least to some extent, and we will try to entice them with another approach. Nope, so they declared war on PADA for not approving their compromise approach. That has only helped the pirates?

And so it goes with many other issues. In other words, instead of compromising with the evil doers, why not compromise with those of us promoting Srila Prabhupada? And now we have the same problem with HKC Jaipur types, they have been making videotapes of the GBC's biggest defenders, and they made another videotape with a person who says the ritviks are snakes, so they are compromised with the bogus guru process and not with us.

It never occurs to some people that they should compromise with those of us who were using the Prabhupadanugas title and name in the first place, before anyone else even knew what that term was? Instead they want compromise with, the cheer leaders of the pirates?

The above woman has also posted comments that the Illuminati / Jewish banker conspiracy / Aliens from the Draco constellation etc. program is simply mental speculation, anti-semitism if not "neo-nazism." Of course, Bhakti Tirtha and Harikesha were fans of these conspiracy programs, and now their tradition is carrying on! Me and Sulochana used to call them -- the tinfoil hats brigade.

The woman above also correctly identifies this anti-Illuminati program as not only mental speculation but mundane bodily platform identification. Srila Prabhupada was not trying to start a birth / race / class warfare program, simply stated. We also a bit surprised that some people are saying PADA deserves to have no income to promote Srila Prabhupada's materials, while other people are getting a free pass of selling mundane speaker's Illuminati DVDs as their business.

In any case, what has been needed all along is for a unified group to cooperate and oppose the GBC's guru process. A few rag tag individuals cannot accomplish much. There are so many divided factions in places like Syria, Iraq, Afghanistan and so forth, and they might fight the main opponents in a unified manner once in awhile -- sometimes -- and then blow up each other and fight among themselves -- at other times.

And thus we have what is technically called "a failed state."

That means basically, hardly nothing can get done. So we should learn from these failed states and try to work more cooperatively. As one reporter said when he visited the region, the electricity does not work regularly, the water supply is shaky, there are lines for gasoline, food is rare and expensive, there is garbage all over the place, the roads are falling apart, the schools are empty, and no one can cooperate to fix even these most basic items.

At the same time, there is no doubt that Madhu Pandit's program is progressing so at least we will have some form of cooperative institutional development. The people who are attacking his program and the PADA program are also not making a whole lot of progress; either by promoting the GBC's guru program; or promoting things like the Draco constellation demon take over idea etc., these programs are simply not something the mass of devotees are going to get behind -- because these deviations were never authorized by Srila Prabhupada for starters. Anyway, we have some form of forward progress going on and we hope others will try to cooperate with that process and unify to help the poor ignorant citizens of the world. ys pd 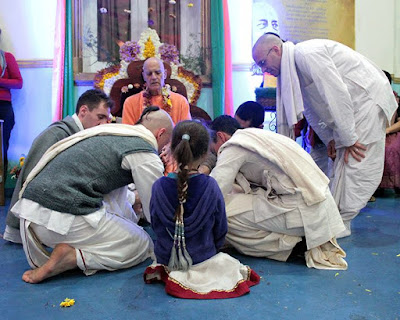 Gunagrahi feet washing ceremony. Srila Prabhupada told us not to allow people to touch our feet, or we will be acting as diksha gurus; And then we will be accepting karma without authority; Which will cause us to get sick, fall down, or both. The GBC has made this feet washing program, and subsequent fall downs and sickness, into a society wide epidemic. The leaders were supposed to curb these deviations and not create such deviations. Yes, Jesus got his feet washed, and clearly, these people think they are on the same level. That means the management is asleep at the switch, or they are promoting this themselves. ys pd