A LIttle Advice from Chanakhya Pandit 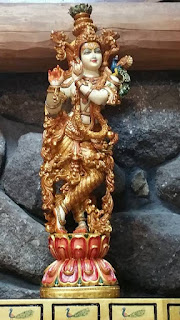 It is better to live a short life doing good deeds -- than living a sinful life for thousands of years. It is your acts that count, not your life span.

One must not fear the future, nor regret the past. Wise men concentrate on utilizing the present to forge a brighter future.

Good people, the deity, and your father will not demand much from you. You can satisfy your kith and kins by offering them nice offered food and words of wisdom.

The nature of noble people is quite opposite i.e. instead of acting arrogant upon attaining wealth they bow down in humility and act more modestly and respectfully. They understand their wealth is a gift from God.

One must give up excess infatuation in order to remain happy and to gain control on life. Infatuation is the root cause of many troubles and worries.

One who practically plans and prepares himself to face life's challenges and difficulties is most likely to succeed against them. On the other hand, if a man leaves behind good sense and lives based on speculation and luck, then he will perish for sure.

A man without religion is living dead, while a religious man lives even after his death.

Like the udders on neck of a goat are useless. In same manner, the life of a person is totally useless; if he has no wealth, no love, and is devoid of religion with no hope of salvation.

It is characteristic of lowly people that they enjoy belittling successful people and envy them.

The attitude of a person plays very significant role in his life. At instances he finds himself bound by worldly desires -- but with a slight change in direction and state-of-mind, he can also set himself free.

It is not possible to fulfill each and every desire. Your fate will not be able to serve them all. The solution is that the man must feel satisfied with whatever possessions he has. At the same time inaction is not recommended.

Even in the herd of thousands, the calf finds its mother. In save way the acts of a person follow him i.e. you can’t run from your deeds.

A disorganized person finds no peace no matter where he goes. In civilized society he faces the criticism of others and in the forest he feels lonely.

We get water by digging, and in the same way on serving / comforting your guru you will gain knowledge.

Each individual gets rewarded as per his deeds. This is why wise men think about the outcome before indulging themselves into any task.

One who don’t show respect to God, takes hundred births in yoni of a dog and then is born as a charlatan.

In the end the mighty sumeru mountain will be uprooted from its base and the land will be wiped away by the sea. Yet even at that time the determined and superior people will be standing firm in their resolve to fulfill their promises.
Posted by krishna1008 at 3:59 PM