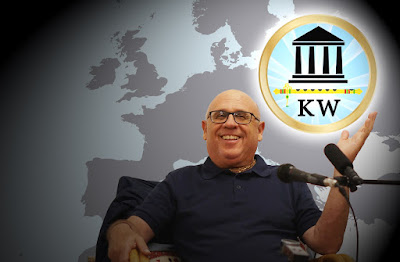 Hrdayananda swami is advertising that the GBC has unanimously voted to promote him as the GBC / Acharya of Brasil, despite recently he was suspended, censured and chastised for so many deviations by the GBC itself. And Hrdayananda recently went to Brasil to hold a big "Krishna West" festival and conference there, so that means the GBC is well aware that they are now going to make Krishna West an official part of the ISKCON GBC's process.

Meanwhile, anyone who wants to worship Srila Prabhupada as the acharya and not the Krishna West compromised acharyas program is banned, removed, censured, harassed, sued, exiled and etc. None of this is new however, the GBC has a policy that suspends, monitors, chastises, sometimes censures someone from their acharya's program, then reinstates that person later on making him the messiah once again. This all started when the GBC suspended Jayatirtha as their acharya for his illicit sex and drugs, then they reinstated him and made him a sannyasa and acharya again.

One devotee who told me about all this says that means the GBC is really opposing not only the mass of devotees who have rejected the GBC's ping pong swami, but the GBC have even ended up opposing their own conclusions that Krishna West is a deviation. So the GBC cannot even uphold their own standards and policies, they have to cave in and allow deviations. Why? Because without deviants and deviations, they would have almost no members to their program?

And that is apparently why, despite a few people objected to Gopal Krishna swami's and Radhanath's program of burying Kirtanananda in a samadhi in the holy dham, the rest of the GBC apparently forgot all about this deviation and brought these folks back into the fold as their hero and biggest preaching authority of ISKCON. Yep, if they bury sexual predators of minors in the holy dham, and orchestrators of the biggest criminal empire in ISKCON aka New Vrdnavana, they are huge saints and heros and are even granted messiah like status in this GBC's campus. 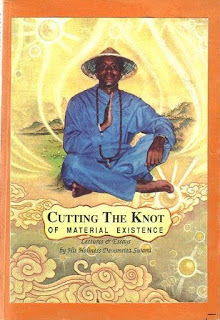 Devamrta was there to help things along. Srila Prabhupada's original books are often banned, but these books are welcomed?

So this is both bad news and good news. The bad news is, the GBC is choosing to become more corrupt as their path forward. The good news is, people even in their own camp are writing PADA to complain that this deviant is being recoronated as the messiah of Brasil, including a devotee from Brasil who told me this is "betraying everything Srila Prabhupada stands for." So that means, more people will side with our view, that these people are corrupt and not acharyas. ys pd 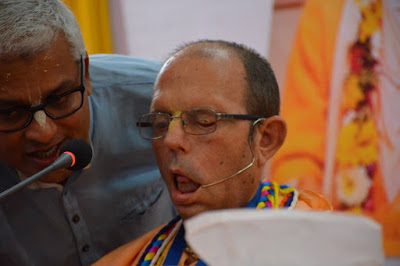 Yes as a matter of fact I can absorb sins like Jesus. Really! Hanuman Croatia's guru Bhakti Vikas swami is the sannyasa disciple of JPS. And that makes him bona fide, because they are the bucket boys for the Hrdayananda lover's club?

Falling Off the Cliff with Krishna West and the GBC Body

MOSCOW, RUSSIA — Did the GBC Body just throw HDG Srila Prabhupada's instructions and standards for Krsna Consciousness under the bus again?
Well, it's no surprise the GBC Body has again given their rubber stamp of approval to Hridayananda dasa Goswami (HDG) and his questionable, compromised Krishna West program... but they have. This is unbelievable and a road to ruin.

What the GBC should have done is say to Hridayananda, 'Preach as you wish, as we can't stop you, but we can't bless or approve such preaching officially under the ISKCON umbrella. ISKCON was set-up by Srila Prabhupada, it's his movement, his standards and instructions for his temples. Sorry, but we have to protect his ISKCON by enforcing his strict set of standards and practices for his temples! If you want to do this Krishna West we can't stop you, but we can't approve or accept it. So go in peace, without us.

Did the GBC body protect ISKCON by saying this to HDG? NO, NOT AT ALL!

The GBC can't correct HDG's Krishna West any more than they have been able to correct many other cans of worms … all the other compromises made in ISKCON: Hinduized ISKCON, New Age ISKCON, green card devotees (who come for the wrong reasons), Feminist Diksa Guru ISKCON... on and on it goes. The GBC condone so many deviations in Prabhupada's Movement.

Hridayananda has said, among other offensive things, "Harinams are a fairy tale," as he sits on the vyasasana in karmi clothes, makes jokes and plays ping pong with women. He's basically a blooped sannyasi. (A Ph.D one too.)

He says, incredibly, that he chants his japa silently 'in his head'. This is for real. He enjoys karmi music, and going to a movie, and why not … it's Krishna West. Chuck out the standards for sannyasis.

Hridayananda openly, disturbingly, says that Srila Prabhupada made many mistakes in his books … (Draupadi was not attempted to be disrobed, etc., etc...) He is preaching that ISKCON is Hindu and 'Indian culture' is not relevant anymore, and it 'turns off Westerners', and so forth… such nonsense talk. And he's so puffed up and arrogant about it!

Why the GBC have again let him off the hook is anybody's guess. To save him from his many offences? To keep him and his disciples in ISKCON? To save their face? To hide so many compromises? He has made so many offensives, so why give him the green light?

Nowadays it seems the GBCs who are supposed to be in control of ISKCON have lost control of ISKCON entirely: from New York to England to Mayapur... New York's Temple arranged for sale illegally and in secret ... Bhaktivedanta Manor's endless Hindu Weddings 4$$$ Profit and compromised New Age style preaching for PR and Money making... All gradually being copied in other temples.

Look at the MESS. So much compromising has been done to ISKCON since Srila Prabhupada left the planet. ISKCON has been hijacked. Krishna West is just the latest deviation.

Srila Prabhupada's disciples are neglected, abandoned, and even banned. They can't even preach his exact words anymore to ISKCON devotees. We can't represent ourselves as Vedic Culture, with so many "Western" new standards, feminist guru movements and a lot of that incorporated into Krishna West etc. and then their people blocking us and contradicting Srila Prabhupada's preaching.

Srila Prabhupada's Movement, his ISKCON and his BBT are being destroyed from within by the very people (GBC / gurus / leaders) who were supposed to protect it. If that's not a crime against Humanity, I don't know what is!

Here are some of my editorial comments on Hridayananda's most recent letter to the GBC and devotees, excerpted below. ISKCON's in big trouble. You can laugh or cry... both are possible.

My Reply to Hridayananda dasa Goswami on His Letter of Sunday, April 17, 2016:

Jaya Prabhupada! I am happy to inform you that I have reached a fair agreement with the GBC which effectively restores peace between us. The GBC is accepting the peace proposal made in New Dvaraka in early January, between myself, then GBC chairman Praghosha Prabhu, and Vaisesika Prabhu.

PEACE PROPOSAL...? Is it a war? Are you at war with the GBC and ISKCON? Seems so. By your Krishna West program and comments about preaching in ISKCON, backbiting GBCs, and your obvious criticism of Srila Prabhupada's statements in his books you are offensive. Your distain for Vedic Culture and disrespect for it, as you lie to your disciples and followers with this letter, is a cop out. Are you even a real Maharaj anymore, or now just a fringe devotee masquerading as a Guru to hide the fact that you can't follow Krsna consciousness strictly anymore. So you've created Krishna West to cover this up, created a new ISKCON, thus misleading many devotees on Srila Prabhupada's intended, true and correct Krsna consciousness standards and practices for His ISKCON.

"For some time now, rumors have been circulating about some members of the GBC trying to restrict my diksa privileges. I am happy to tell you that the GBC has wisely decided to reject this idea."

YES, It's true, why are you calling it rumours? The fact is you are splitting ISKCON and embarrassing the Indians and Indian devotees by compromising illegally Srila Prabhupada's Movement and saying it's ok with Krishna West. It's the fault of the GBC body NOT to ban you from taking disciples, but then again, you were one of many Zonal Acaryas -- rubber-stamped gurus who contributed to this mess ISKCON is now in. Its' your failure that you are not honest enough to admit this fact to the worldwide devotee community.

"To reciprocate with them, I agreed at their request to come to the next full GBC meeting, to be held in October in Mumbai. There, I will meet with a balanced GBC subcommittee, hopefully to continue improving our relationship. Prabhupada often said that when devotees disagree, they should sit down together to work out their differences. Thus I accepted the GBC request that I come to Mumbai as reflecting Prabhupada's way of resolving problems between devotees."

The GBC Body should have suspended you as a Guru and leader and asked you to stay in India for a long time to preach and get purified, serving and associating with some nice humble Indian devotees so you can reform your warped mentality. Unfortunately that didn't happen.

"I want to take advantage of my trip to India to visit holy places associated with the Maha-bharata story."

Take full advantage of your trip to India by associating with and performing humble service to nice Indian devotees, and make an apology to them personally and publicly for berating their Vedic Culture. Remember every day you set foot in an ISKCON Temple just how unqualified you are.

It's useless, your Ph.D and materialistic home, and this material facility is clearly confusing you. Better you get back to your roots in Krishna Consciousness. Be humble, before you die. Become the strong preacher you once were, if you really want to save ISKCON.

"Hopefully, by Krishna's mercy we will now begin a time of peace among devotees, and powerful preaching, especially in the West. This will fulfill the self-description that Prabhupada wrote at the conclusion of his pranama mantra: pascatya-desa-tarine, "Savior of the Western lands."To all my disciples, friends, and supporters who have stayed with me, my eternal gratitude for your patience, loyalty, and intelligence
With best wishes,
Hridayananda dasa Goswami"

Maharaja, in a nutshell, I (we) don't hate you. We care about you and Prabhupada's ISKCON. We are not envious of you. Simply put, many godbrothers/sisters and other devotees are alarmed. We see you as being in maya, illusion of your own ideas, and the weak GBC can't correct you.

Live up to your title, Gosvami, and stop embarrassing ISKCON and Srila Prabhupada. Many devotees are concerned about your Krishna West's direction, your behavior and the watered down preaching you are becoming famous for. We see that you are off Srila Prabhupada's intended path, and have lost his direction for preaching in His ISKCON. You misrepresent Prabhupada's instructions, and you're proud about it.

We wish you well, but please do not further drag ISKCON down the Compromised Road to Ruin, be it Krishna West, Rock music, Classical music, Festival of Colors, illegal Hinduized wedding at ISKCON Centers, New Age Yoga, hospitals, woman gurus, karmi clothes, or any other concoction for ISKCON.

Please re-think it. Failure to do this will only mislead devotees, and they will not get the desired result: pure Krishna-bhakti, Vedic Culture as Srila Prabhupada gave you and us. Failure to implement Prabhupada's programs may block devotees from going Back Home, Back to Godhead.

The Choice is yours

Sincerely,
your servant and servants,
Jaya Madhava das (ACBSP)
and all other devotees in agreement
Posted by krishna1008 at 5:57 AM