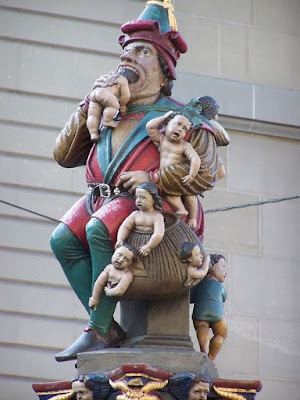 The GBC's gurus at work?

HOW can they who gave poison to Srila Prabhupada, and who systematically destroyed his movement, all to kill him and his movement -- then CHANT the Holy name?


No! - they only utter MUNDANE LETTERS OF ALPHABET.
Note: just thought —-to share some realization. Lets study WHY and HOW these Anti Ritviks who have REJECTED Srila Prabhupada as Diksa Guru are going to hell. First of all note HOW Krsna (TRANSCENDENTAL SOUND) is NOT MANIFEST on their tongues. Just see!!!! Krsna does NOT want to be on their tongues.

They are so envious of Srila Prabhupada’s unique position of Diksa guru so WHY will Krsna be on their tongues? What they are C-R-O-A-K-I-N-G is MUNDANE LETTERS OF ALPHABET : “SUCH NEGLIGENT UTTERANCE FOR THE SENSE GRATIFICATION OF MATERIALISTIC PERSONS IS NOT A VIBRATION OF TRANSCENDENTAL SOUND. ”

[PADA: Right, we have various GBC / Ravindra Swarupa / Rocana / Torben Neilsen / Ajit Krishna / Kailash chandra / Gaudiya Matha / Gaura Govinda Maharaja et al. all saying Srila Prabhupada is the -- post samadhi, posthumous, post mortem person. That means they are trying to minimize his position, so they can fit in their "elected" bogus GBC "living" gurus. Does any other religion claim that their messiahs are the post mortem dead people? Its enviousness of the acharyas ... and now Kim Moller of the Torben / Ajit Krishna group says he supports Drutakarma, the "friends of the BBT" folks who are changing the books. Why does the Torben / Ajit / Kim group want to support changing the books of the acharyas?]

Look! Do you see HOW Krsna has REJECTED them? They have rejected Srila Prabhupada’s July 9th 1977 Ritvik Order and therefore REJECTED Srila Prabhupada as Diksa Guru —-sooooo Krsna is ALSO VERY VERY VERY CLEVER Just see HOW Krsna has REJECTED these Anti Ritviks they are ONLY croaking MUNDANE LETTERS OF ALPHABET. Bas!!! NOT A VIBRATION OF TRANSCENDENTAL SOUND. These Anti Ritviks are soooooooooo UNFORTUNATE!!!!!!!.

“SUCH NEGLIGENT UTTERANCE FOR THE SENSE GRATIFICATION OF MATERIALISTIC PERSONS IS *NOT* A VIBRATION OF TRANSCENDENTAL SOUND”.

The holy name is very POWERFUL it is Krsna HIMSELF: “The letters of the holy name have so much spiritual potency that they act even when uttered improperly.

On the other hand, if one who is eager for devotional service utters the holy name even partially or improperly, the holy name, who is identical with the Supreme Personality of Godhead, exhibits its spiritual potency because of that person’s offenseless utterance. Thus one is relieved from all unwanted practices, and one gradually awakens his dormant love for Krsna.
Note: Anti Ritviks have REJECTED BONA FIDE Diksa guru Srila Prabhupada therefore they are CHEATED:
SC 8 Religion
The Vaisnava principles enjoin, adau gurv-asrayam: THE FIRST STEP IN UNDERSTANDING SPIRITUAL KNOWLEDGE is to take shelter of a BONA FIDE guru.
Madhya 24.330 The Sixty-One Explanations of the Atmarama Verse
MAHA-BHAGAVATA-srestho
brahmano vai gurur nrnam
sarvesam eva lokanam
asau pujyo yatha harih
maha-kula-prasuto ‘pi
sarva-yajnesu DIKSITAH
sahasra-sakhadhyayi ca
na guruh syad avaisnavah

(The guru MUST be situated on the topmost platform of devotional service. There are three classes of devotees, and the guru MUST be accepted from the topmost class. The first-class devotee is the spiritual master for all kinds of people. ….When one has attained the topmost position of MAHA-BHAGAVATA, he is to be accepted as a guru and worshiped exactly like Hari, the Personality of Godhead. Only such a person is eligible to occupy the post of a guru.))
Note The word DIKSITAH refers to Diksa and ONLY Maha Bhagavata is the one mentioned WHO give this BY DEFINITION.

“I AM THE SPIRITUAL MASTER OF THIS INSTITUTION, AND ALL THE MEMBERS OF THE SOCIETY, THEY’RE SUPPOSED TO BE MY DISCIPLES. They follow the rules and regulations which I ask them to follow, AND THEY ARE INITIATED BY ME SPIRITUALLY.”(Srila Prabhupada Radio Interview, 12/3/1968)

[PADA: Right, all of the 1978 original 11 gurus either got very sick, fell down, or died, and a lot of their successor folks -- who were voted in by the bogus 11 --as the current wave of GBC gurus -- are also experiencing all sorts of similar problems. A friend of the GBC's gurus says recently the leaders have had to place themselves into a locked bunker, a cocoon, to avoid "the angry mob," because "most of the God brothers are angry with them." So all they are doing is making the vaishnavas angry, and that's not transcendental, in fact its not even material, its anti-vaishnava. They are not situated on the platform of transcendence, clearly.

Anyway, a lot of people said PADA editor has lost his mind when we introduced the poison issue, but unfortunately for the leaders, this issue is gaining more traction all the time, because its self evident these leaders are capable of destroying everything, including their own guru, his books, his children, his devotees, his movement, and destroying the whole world if they could as well. This is why Srila Prabhupada says the demons are trying to destroy the world. Good job Mahesh Raja, you nailed it. ys pd]

To PADA: How about this one?

This quote goes along with what Mahesh wrote below-

One has to receive the transcendental sound from the right source, accept it as a reality and prosecute the direction without hesitation. The secret of success is to receive the sound from the right source of a bona fide spiritual master. Mundane manufactured sound has no potency, and as such, seemingly transcendental sound received from an unauthorized person also has no potency.