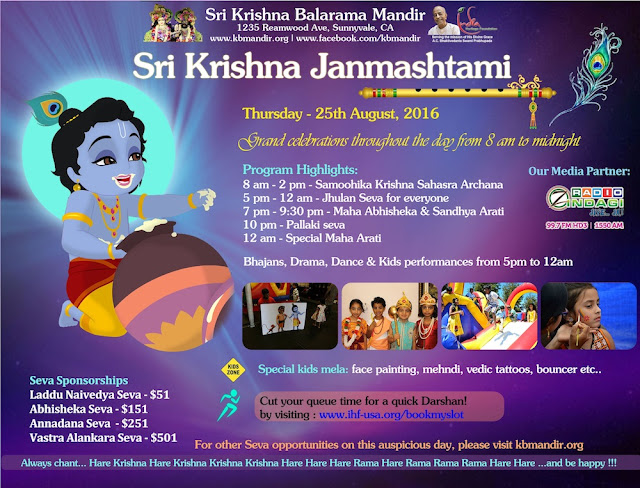 In the Bhagavad-gita (4.9), Lord Sri Krishna says that His appearance, birth and activities are all transcendental and that one who understands them factually becomes immediately eligible to be transferred to the spiritual world. The Lord’s appearance or birth is not like that of an ordinary man, who is forced to accept a material body according to his past deeds. He appears out of His own sweet will.

At the time of Krishna’s birth, the planetary systems were automatically adjusted so that everything became auspicious. Everywhere, there was an atmosphere of peace and prosperity. Auspicious stars were visible in the sky. The rivers were flowing full of water and the lakes were beautifully decorated with lotus flowers. The birds in the forests began to sing in a sweet voice. The wind was blowing very pleasantly, carrying the aroma of different flowers. Thus Krishna appeared on the eighth day of the dark fortnight (Krishna-paksha ashtami) in the month of Shravana (July-August). The astrological influence of the star, Rohini was predominant at that time.

So every year, on the eighth day of dark fortnight in the month of Shravana, devotees all over the world celebrate the auspicious appearance day of Lord Sri Krishna. This day is a very special day in the lives of the devotees of Krishna. Great acharyas recommended that one should observe Janmashtami Vrata for the pleasure of the Lord.