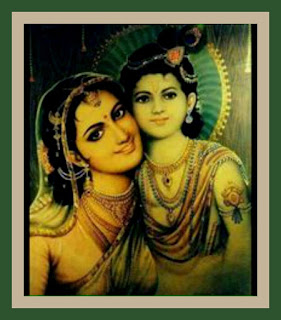 Demons were always trying to steal Krishna from Mother Yasoda

This is in response to "Radha Madhava are welcomed to ISKCON Leicester" from the Dandavats website managed by Pragosh das.

[PADA: Right, the GBC's front man and web site manager is really one of their worst agent provocateurs, namely Praghosa dasa. This is the same guy who teased the little Mayapura children that he was building them a playground, then he said this was a joke, and so they all started crying. The local Bengalis also wanted him removed from Mayapura for all sorts of reasons. Praghosa is also a big defender of the GBC's illicit sex, drugs and criminality guru sampradaya. Right, Krishna's successors are often debauchees, who knew! Lovely!]

May I first say that I feel disgusted that Pragosh (the GBC member who stole the Deities) is stating that he has known Sri Sri Radha Madhava since 1983. Pragosh in 1983 was working as a postman in London and it was not until 1985 that he traveled back to Ireland and joined the Hare Krishna movement full-time prior to helping out in Govinda's Restaurant in London.

Pragosh aka Paul Murphy is also claiming, according to this article, that "In an exchange of love, ISKCON Leicester has given their Panca Tattva Deities to ISKCON Belfast, in a solid expression of gratitude." This is simply nothing but lies and spin to convince the reader that this act took place without any argument. The Leicester Temple did not wish to part with their bas relief of the Pancha Tattva, which they had for a long period of time. Pragosh forced the temple authorities to hand Them over to Belfast as some sort of a consolation prize to pacify the disappointed devotees for forcing the Belfast community to surrender their Deities.

[PADA: Right, so both communities were attacked. Of course the Philadelphia devotees had to fight the GBC to get rid of Ravindra; the NYC temple is kicking out people for protesting the sale of that building; the Phoenix temple has been fighting the GBC for kicking out 30 people; the Vancouver temple kicked out their best kirtana people and they had to make their own program; and there are communities up in arms over the GBC in Australia and etc. OK, this is all really good news, the citizens are finally taking action to defend themselves from these exploiters. (A little late in the game, but something is better than nothing).]
The Belfast Deities were not however exchanged. The Belfast community did not want to let Them go and had an awaiting court order about to begin which would have prevented Them from being taken.

Hence Pragosh and his useful idiots had to sneak into the temple under the cover of darkness and steal Them while the temple devotees were sleeping and when the congregation were not around. When the pujari awoke and alerted the other resident devotees nothing but screaming, crying and sobbing could be heard from most of the devotees living in the temple.

[PADA: Yep, the Prabhupada devotees, the gurukulis, and their own disciples, are often screaming and crying at the atrocities the GBC engages in. That is what Srila Prabhupada says, wherever the demons are, the devotees are crying.]

Some were hysterical and unable to speak due to the fright of the Deities disappearance from the alter so suddenly. The police were summoned but it was too late to catch them. So to say that the exchange was "loving" completely insults the Belfast community, who did not want their beloved Sri Sri Radha Madhava to leave their care after 30 years. Using this phrase is a disgusting attempt to hide the actual reality and make it out to appear that all went well.

The biggest slap in the face to the community was by mentioning in the Dandavats article that "Praghosa Dasa, GBC for the UK said: "Having known Radha Madhava since 1983, I cannot remember a more auspicious and blissful event in Their association than today in Leicester."

Wow!!! This man, who is respected by so few in his own Yatra and who conveniently hides himself away from most of the Irish community like an absent landlord, rarely took the opportunity to ever come visit these particular Forms of the Lord. Pragosh has been known to come visit them every 5 to 6 years to simply bow his head and quickly disappear.

He has been rarely seen or present in Belfast while most of the congregation have heard about him, but never seen him. So to claim that a relationship was in place is yet another form of spin to convince his innocent audience in Leicester that he is emotionally attached. This is simply condescending and further insulting to those who actually did develop a loving and tangible relationship with Them based upon Seva. Pragosh's desire to distract and take most of the credit for himself begs belief.

[PADA: That is also what happened here in San Francisco and other places. Swarupa Damodara was the guru, and he showed up here once every two years, so some of his disciples were smoking pot and etc. and no one was here to guide them. Its absentee managing, which never really works. You need to have local people doing local managing, not to have some "guru" or GBC who has a giant million square miles of "zone" that he simply cannot oversee due to its size ... of course its better that theses gurus and GBC never visit in many cases because then they create chaos when they visit. Gunagrahi's disciple for example told me that the worst times that they had in South America was when their guru would visit, and he would turn everything upside down and create mayhem, including breaking up marriages and destroying families.]

The Deities were taken not because Their standard of worship was in question. (I will write a further article later to dispute this allegation and have it endorsed by the community.) They were taken to appease a Hindu community who had the capacity of giving large donations to Pragosh's institution and as a catalyst to close down the Belfast Temple, knowing that after the removal of the Deities the temple could be wound down in view of selling (more on this point later.)

The Belfast community has also learnt from Leicester sources that when Pragosh and his obedient Belfast management team do eventually close the community of devotees temple here in Belfast, that the Pancha Tattva bas relief will also be going back to its original home in Leicester, which was also another form of deception. Hence the Leicester management agreed that their bas relief of Pancha Tattva may go to Belfast but only as a temporary measure, knowing someday they would have it returned, while the Belfast community would be left with absolutely nothing they have worked hard for in over 30 years.

This must be the greatest insult to any local Vaisnava community in recent years. Only the attempted sale of the New York temple saga in recent months takes precedence. The deception and the underhanded means of the GBC to achieve their outcomes in both cases is quite astonishing.

[PADA: Well the GBC has been kicking out devotees, and selling farms, houses and buildings for years together. I am glad some folks are finally catching on to this scam. Hansadutta closed the Seattle temple and stole those large Radha and Krishna deities, who are now residing under a carport, this has been going on for decades, wake up people! ys pd]