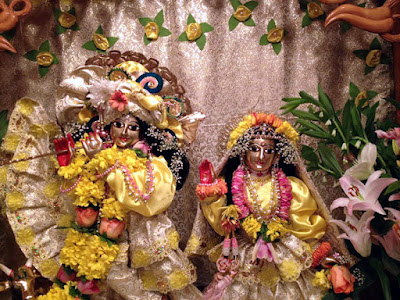 Approximately between 23.00 hours on Monday, August 15th and 01.00 hours Tuesday, August 16th, UK time, the Deities Sri Sri Radha Madhava were removed from Their Temple in Belfast. A short time later a concerned community member, when seeing the Deities gone, contacted the police to report the Deities stolen. The police attended the scene, conducted their investigation and made a report. Some persons were questioned by the police at the Temple, and others in their homes near the Temple.

Apparently the Deities were 'officially scheduled' to be taken to the new (Hindu) Temple in Leicester UK on Aug 24th, against the wishes of many community members. Subsequently a group of concerned community members had sought legal advice and applied for a court injunction, to be served during business hours on Aug 16th, to stop the Deities removal until the issue was arbitrated through the courts.

It appears the court injunction was leaked, which precipitated the early, hasty and clandestine removal of Their Lordships! During the drama when the Deities were being secretly removed, allegations of verbal threats were traded between the pro and anti-camps. Sri Sri Radha Madhava have been worshiped in the Belfast Temple for 30 years.

[PADA: Right, this is very typical of the types of problems the GBC's guru program creates. Generally speaking, the GBC stops the devotee initiations process by forcing people to take initiations from one of their foolish messiahs -- instead of Srila Prabhupada, and then hardly anyone signs up and most people simply leave. And later, they might say "oh there is not enough poojaris and cooks here, lets move the deity and / or shut down the temple."

So this is very heart wrenching for the people who have been serving these deities. I know at least a few people who died shortly after they were not allowed to worship the deity anymore by the GBC's guru's thugee program.

Srila Prabhupada said we cannot invite Krishna and then move Him somewhere else or put Him in storage, but this problem seems to be happening more and more as the GBC's guru program disintegrates more and more. Meanwhile, our Prabhupadanugas program, especially in India, is bringing in more and more deities and getting them to be served and worshiped nicely.

No wonder then, the GBC is spending apparently $20,000,000 suing our devotees there to stop them from the process of worshiping the Krishna deity. If its one thing the GBC gurus have to stomp out -- its the people who are worshiping the deity of Radha and Krishna!

Thus the GBC has declared, "Spare no expense, get the Radha and Krishna deity worship eradication program going full blast." This is just another example of how their program disturbs the process of worship of Krishna. Of course this process was going on even when Krishna was here. Kamsa was attacking the devotees and trying to disturb their worship of the Lord.

Its the same process since time immemorial, and in fact Krishna was kidnapped and moved even way back then. Why does the GBC as a group apparently think Krishna is just a statue that you just move around like a living room lamp? More than a few devotee have told me that suing the Prabhupada devotees so they can kick out more the cooks and poojaris is actually one of the biggest expenses the GBC has, their court case to kick out all the servants of the deity is their main priority. And kicking out the devotees is more important than varnasrama, book printing, making temples or etc. In other words, the main priority of the GBC is to remove those who are serving Krishna. Same program as Kamsa, Ravana, Hiranyakashipu, the Muslim invaders, the British who said deities are stones, etc.