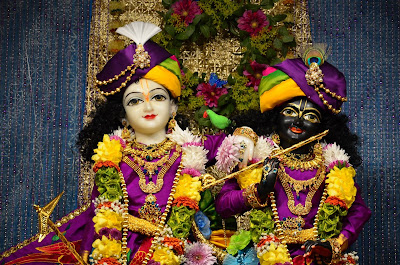 The other “scenario” that Rocana dasa is referring to is, of course, ISKCON's current way of doing things [voting in gurus] but since what Rocana dasa offers us under his new Constitutional society provides for us nothing different, it would be wise perhaps to ask “It doesn’t work already, so why change it for something else that doesn’t work?”

Rocana’s counter to this in so many words is -- that he hopes that his idea will not work as bad as the current program, but if you’re going to try to fix something, some piece of equipment for instance, why try to replace one defective part with another part that is also defective? Why not simply replace the broken piece with one that works? Why not then, instead of offering kanistha and madhyama level devotees to prospective initiates, offer them instead the pure devotee Srila Prabhupada?

[PADA: Right, instead of saying, lets worship the pure devotee for a change, Rocana keeps hoping against hope his worship of conditioned souls will fly. It won't. OK Srila Prabhupada does say you can cheat people FOR SOME TIME, but eventually this house of cards collapses in a heap.]

Because you don’t believe in it? Hardly scientific Rocana dasa and since your already preaching asiddhantic yourself by your telling us that it’s ok for gurus who are on the lower to middle level to come into your society and to bring their disciples with them, to what shall we actually attribute your lack of acceptance of the Rtviks into your new scheme of things for the devotees to do? Would it be to your own envy or to your lack of faith or simply to your own confusion which you have become to proud and puffed up to admit to?

In Rocana dasa’s article he cites the reasons or gives the excuses for his proposition in regards to his fumbling changes when he writes: “But the process recommend in the Constitution eliminates two all-important problems: it does not go against sastra, and it does not paint the whole society and its leadership with a bad brush when a guru falls down or is found to be unqualified. What it does do is ensure a system in which, immediately upon disclosure of a problem, decisive action is taken by the leadership, with full disclosure.”

We have already seen that Rocana dasas first claim is false by it’s allowance of less than uttama-adhikari pure devotees of Krsna to serve as initiating gurus under his new Constitution, now we look to his second claim to examine its credence: “it does not paint the whole society and its leadership with a bad brush when a guru falls down or is found to be unqualified”

It doesn’t? Rocana seems to forget the general reaction of the public to such News Headlines as that informed the public that :The Hare Krishna’s” were drug smuggling or the reaction that they had to Monkey on a Stick. If Rocana dasa is so naive though as to think that such an open door invitation as he is making now to whoever wants to come into his new society to ultimately take over it and to exploit its membership and to pervert it to a degree even worse than the Zonals ever did, then someone who cares about him should bring him to his senses for he has totally forgotten about Maya but she has not however forgotten about him. Let us all pray for Srila Prabhupada’s mercy upon Rocana dasa and all of those foolish enough to sign such a devils pact. We are reminded of the sign over the Inferno “Abandon all hope, ye who enter within.”

Srila Prabhupada is our greatness, offer his mercy to everyone then perhaps they will not begrudge us all for the faults of being sometimes fools and for having sometimes followed those who were less even than the beasts in our foolishness and self delusion.

[PADA: Rocana's (and the GBC's) "guru -- by 2/3 show of hands voting" was never approved by any acharyas, and its simply is not the system of manifesting acharyas. The acharyas are self manifesting by their own -- and Krishna's -- potency (aka Krishna shakti). More importantly, Rocana's system of guru approval, guru voting, guru suspension, guru correcting, guru censuring, guru administering, guru removal, guru excommunicating and so forth, has not been working.

I am a little surprised that Ajit Krishna, Torben Nielsen, and Kim Moller are still promoting Rocana's speculative guru voting / censuring etc. program, despite their knowing that most of the gurus "voted in" to this system have fallen into scandals, and this has created a huge public media explosion of bad PR for ISKCON. They still don't get it, this guru voting program is -- bogus. Its also detrimental. It also, is not working. It also is not precedented in Vaishnava history, there are no examples of acharyas being voted in, monitored, censured, suspended, removed etc.

And thus what happens in real life is -- when Rocana's "gurus" go into a tail spin of scandals and / or lawless behaviors, this has to be dealt with by mundane society's law enforcement, including the Berkeley Police Department, Federal Marshals, FBI, Interpol, as well as various people having to sue the GBC with extremely expensive lawsuits, and lets not forget the regular and odious media exposes and etc.

Why is Rocana still peddling this witch's brew of dysfunction and criminality in the name of guru and God? And since Rocana's program ruins the name of ISKCON, how does he propose to fix that? OK, he doesn't seem to care if the reputation of the society goes into the tank or not?

Rocana and his "voters" apparently do nothing of significance to reign in their bogus acharyas, rather the karmi society has to do their dirty work for them. Why does Rocana rubber stamp a pile of bogus acharyas, then he lets the mundane (karmi?) society's law enforcement and media control and reign them in for him? And why doesn't Ajit Krishna and pals ever tell us why they support Rocana's plan, despite they are claiming to be reformers? OK Rocana was one of the original 1986 reformers, and his program reinstated Bhavananda and voted in many of the current gurus. What kind of reform is that?

One reason "repairing deviant messiahs" does not work is -- there is no actual Vedic system for a Governing Body to administrate the activities of the acharyas. Of course, nowadays the GBC has buried Kirtanananda in Vrndavana, and this is fueling his bogus program there. And while some of the GBC's might disagree with this program of supporting Kirtanananda's "samadhi," they cannot get the 2/3 majority to dis-approve.

Anyway, one of the real problems here is that when Rocana's bogus messiahs get out of control, its mainly the karmi police, media and courts that check their manufactured Frankenstein gurus, whereas the GBC, Rocana, and his disciple like Ajit Krishna, never do much of anything to fix their broken down messiahs. Thus the "karmis" often have to intervene for them. Maybe making out of control Frankenstein gurus is not the right path forward, just saying! ys pd]