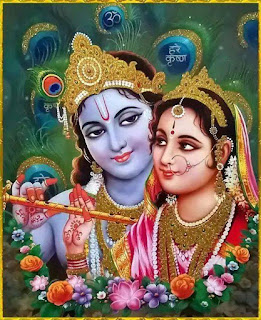 Shri Yudhisthira Maharaja said, "Oh Madhusudana, Oh killer of the Madhu demon, please be merciful to me and describe to me the Ekadasi that occurs during the light fortnight of the month of Shravana (July-August)."

The Supreme Lord, Sri Krishna, replied, "Yes, Oh king, I shall happily narrate its glories to you, for just by hearing about this sacred Ekadasi one attains the merit of performing a horse sacrifice.
"At the dawn of Dvarpara-yuga there lived a king by the name of Mahijita, who ruled the kingdom of Mahismati-puri.

Because he had no son, his entire kingdom seemed utterly cheerless to him. A married man who has no son gains no happiness in this life or the next. The Sanskrit word for 'son' is putra. Pu is the name of a particular hell, and tra means 'to deliver.' Thus the word putra means 'a person who delivers one from the hell named Pu.' Therefore every married man should produce at least one son and train him properly; then the father will be delivered from a hellish condition of life. But this injunction does not apply to the serious devotees of Lord Vishnu or Krishna, for the Lord becomes their son, father, and mother.

"Truth is my mother, knowledge is my father, my occupational duty is my brother, kindness is my friend, tranquility is my wife, and forgiveness is my son. These six are my family members."
Among the twenty-six leading qualities of a devotee of the Lord, forgiveness is the topmost.

Therefore devotees should make an extra endeavor to develop this quality. Here Chanakya says "forgiveness is my son," and thus a devotee of the Lord, even though he may be on the path of renunciation, may observe this Ekadasi and pray to attain this kind of "son." For a long time this king tried very hard to obtain an heir, but to no avail. Seeing his years advancing ever onwards, King Mahijita became increasingly anxious.

One day he told an assembly of his advisers: 'I have committed no sin in this life, and there is no ill-gotten wealth in my treasury. I have never usurped the offerings to the demigods or brahmanas.
When I waged war and conquered kingdoms, I followed the rules and regulations of the military art, and I have protected my subjects as if they were my own children. I punished even my own relatives if they broke the law, and if my enemy was gentle and religious I welcomed him. Oh twice-born souls, although I am a religious and faithful follower of the Vedic standards, still my home is without a son. Kindly tell me the reason for this.'

"Hearing this, the king's brahmana advisers discussed the subject among themselves, and with the aim of benefiting the king they visited the various ashrams of the great sages. At last they came upon a sage who was austere, pure, and self-satisfied, and who was strictly observing a vow of fasting.
His senses were completely under control, he had conquered his anger, and he was expert at performing his occupational duty. Indeed, this great sage was expert in all the conclusions of the Vedas, and he had extended his life span to that of Lord Brahma himself. His name was Lomasa Rishi, and he knew part, present, and future.

After each kalpa passed, one hair would fall out of his body (One kalpa, or twelve hours of Lord Brahma, equals 4,320,000,000 years). All the king's brahmana advisers very happily approached him one by one to offer their humble respects. "Captivated by this great soul, King Mahijita's advisers offered obeisances to him and said very respectfully, 'Only because of our great good fortune, Oh sage, have we been allowed to see you.'

"Lomasa Rishi saw them bowing down to him and replied, 'Kindly let me know why you have come here. Why are you praising me? I must do all I can to solve your problems, for sages like me have only one interest: to help others. Do not doubt this.' Lomasa Rishi had all good qualities because he was a devotee of the Lord.

"In one who has unflinching devotional service to Krishna, all the good qualities of Krishna and the demigods are consistently manifest. However, he who has no devotion to the Supreme Personality of Godhead has no good qualifications because he is engaged by mental concoction in material existence, which is the external feature of the Lord."

"The king's representatives said, 'We have come to you, Oh exalted sage, to ask for your help in solving a very serious problem. Oh sage, you are like Lord Brahma. Indeed, there is no better sage in the entire world. Our king, Mahijita, is without a son, though he has sustained and protected us as if we were his sons. Seeing him so unhappy on account of being sonless, we have become very sad, Oh sage, and therefore we have entered the forest to perform severe austerities. By our good fortune we happened upon you.

Everyone's desires and activities become successful just by your darshan. Thus we humbly ask that you tell us how our kind king can obtain a son.' "Hearing their sincere plea, Lomasa Rishi absorbed himself in deep meditation for a moment and at once understood the king's previous life. Then he said, 'Your ruler was a merchant in his past life, and feeling his wealth insufficient, he committed sinful deeds. He traveled to many villages to trade his goods. Once, at noon on the day after the Ekadasi that comes during the light fortnight of the month of Jyeshtha (Trivikrama - May-June), he became thirsty while traveling from place to place.

He came upon a beautiful pond on the outskirts of a village, but just as he was about to drink at the pond a cow arrived there with her new-born calf. These two creatures were also very thirsty because of the heat, but when the cow and calf started to drink, the merchant rudely shoved them aside and selfishly slaked his own thirst. This offense against a cow and her calf has resulted in your king's being without a son now.
But the good deeds he performed in his previous life have given him rulership over an undisturbed kingdom.' "Hearing this, the king's advisers replied, 'Oh renowned rishi, we have heard that the Vedas say one can nullify the effects of one's past sins by acquiring merit. Be so kind as to give us some instruction by which our king's sins can be destroyed; please give him your mercy so that a prince will take birth in his family.'

"Lomasa Rishi said, 'There is an Ekadasi called Putrada, which comes during the light fortnight of the month of Shravana. On this day all of you, including your king, should fast and stay awake all night, strictly following the rules and regulations. Then you should give the king whatever merit you gain by this fast. If you follow these instructions of mine, he will surely be blessed with a fine son.'

"All the king's advisers became very pleased to hear these words from Lomasa Rishi, and they all offered him their grateful obeisances. Then, their eyes bright with happiness, they returned home.
"When the month of Shravana arrived, the king's advisers remembered the advice of Lomasa Rishi, and under their direction all the citizens of Mahismati-puri, as well as the king, fasted on Ekadasi.
And on the next day, Dvadasi, the citizens dutifully offered their accrued merit to him. By the strength of all this merit, the queen became pregnant and eventually gave birth to a most beautiful son.

"O Yudhisthira," Lord Krishna concluded, "the Ekadasi that comes during the light fortnight of the month of Shravana has thus rightfully become famous as Putrada ["bestower of a son"]. Whoever desires happiness in this world and the next should certainly fast from all grains and legumes on this holy day. Indeed, whoever simply hears the glories of Putrada Ekadasi becomes completely free of all sins, is blessed with a good son, and surely ascends to heaven after death."

Thus ends the narration of the glories of Shravana-sukla Ekadasi, or Putrada Ekadasi, from the Bhavishya Purana. Joy can only be experienced when we offer our love to Krishna.
All glories to Srila Prabhupada. Always think of the Lotus Feet of Lord Krishna and you will find no difficulties in executing the tasks allotted to you by Krishna. The holy name of Krishna has extraordinary spiritual potency because the name of God is non different from God Himself
Chant these names with love and you will feel ecstasy: