PADA is the Alex Jones of ISKCON? (From Oz) 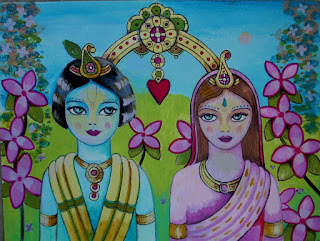 Hare Krsna Puranjan Das, great to receive an email from you. I always read for your blogspot since you have some very interesting posts. You are like the Alex Jones of Krsna Consciousness! You are exposing corruption on all levels in the movement, so all hats to you sir. Thank you for your devotional loving service to Krsna and to All His SOULS! I am from Australia, do you have a temple or programme running here in Oz? Om Tat Sat. ****** dasa

[PADA: Thanks prabhu. I do not know of any regular Prabhupadanuga programmes running in OZ. From my stats -- it looks like we have a number of sympathizers and readers there -- but no official programmes that I am aware of, and OZ is a vast place and no doubt our readers are spread out all over the place. If there are any programmes there that we are not aware of let us know at angel108b@yahoo.com.

As for PADA being like the Alex Jones of ISKCON, thanks very much for that. Yes, he is always rabble rousing the establishment, and I especially appreciate his concern for children who are in exploited conditions. Someone sent me a tape of Alex Jones talking to David Icke on the subject of children being exploited and they were very concerned and passionate about it. The person who sent me the tape said that there is no apparent difference between what they say about children's issues and what PADA says. Anyway, bravo for them on this issue!

I am not a very big supporter of much of the rest of their ideas, but on this matter, they are right on the money. Its often amazing that often ordinary "mundane" citizens have more concern for countering bogus programmes than many of our "devotees" have.

Yes, we have had to go after these bogus gurus, and no doubt about it, Krishna has helped us survive the process. At this point in time what we need the most are factual and operating counter programs that are independent of the GBC's management, and which emphasize Srila Prabhupada. We have a few here and there which we try to advertise but its a struggle since most of our folks have little resources. Our idea of re-establishing Srila Prabhupada as the acharya is moving ahead, the road has been a little bit bumpy, but its progressing nonetheless.

Thanks for your support and I'm glad to hear our newsletters are being read regularly and are encouraging folks in different parts of the world. We are getting more and more readers from more and more diverse places, so apparently there is a need and want for our services. All glories to Srila Prabhupada, ys pd]