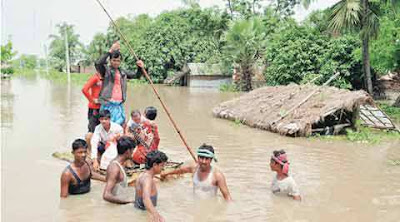 Mother Ganga touched the Lotus Feet of Sri Sri Radha-Madhava in the year 2000, but she has not come to greet the new Pancha-Tattva Deities, installed only 2 years ago. A rather dry rainy season was coming to an end ... no one expected any flood in Sri Mayapur this year. Then the news came - the dams are too full and the Government has opened them up, in a few hours we will have a flood.

The milkman came to deliver his daily bucket of milk - "No thank you," said my husband, "Don't you know what is happening? We are packing up because of the flood!" "But it is not raining anymore," was his reply. He did not seem to know that floods in Mayapur are usually not caused by the rain directly, but rather by the opening of large water reservoirs higher up the Ganga, a few days after the rain, to save those dams from bursting.

The first day was passed moving things up to higher apartments, and speculating as to whether it will really flood. Someone had heard that the a Government Official said it will not go beyond ankle level....well, that was already there, and the water was no longer pouring in. Children found it a jubilant opportunity to splash all around in the brownish, cool water.

The next morning was more alarming - the water level was rapidly rising. To leave or not to leave? "Why not just stay happily on the top floor and take an occasional dive directly into our merciful Mother Ganga?" one might ask... "and swim in ecstacy to the Lotus feet of Nrsimhadeva? And in this way wait for the flood to end."

Some of the more experienced residents of Mayapur could answer this - there will be no electricity, eventually the water will stagnate, it will be full of sewage that has washed up, full of dead entities, mosquitoes and diseases, food will become scarce as well as drinking water, no clean bathing water will be available....the initial joy of the children will turn in to runny noses and colds and flu as they will be constantly wet, during the last flood some had jaundice too, not to speak of the boredom of keeping a child in one room for four weeks until everything has dried up, not forgetting to mention the water snakes....

I took one look at my four-year old son and decided we had to move out immediately - so on Day 2 we headed for the "Long Building" where all the devotees normally congregate during the flood, and where a few stalwart local devotees will reside for the duration of the flood to take care of Their Lordships...From there at least it was close to the road which was a little elevated so that one could still escape.

Mangala Arati Day 3....The water is waist level near the temple and up to head level in the Grhasta Area. Mother Ganga seemed determined to reach Lord Caitanya's feet. We decide to leave by 10 am, after Gurupuja. By 7 am we say farewell to some devotees who are crossing the area by boat to the main road where we can still get a 4x4 to go to Kolkata. The local devotee in charge of transport tells me "You better leave with this group NOW, Mataji." I insist we want to greet the Deities first, and the look on his face tells me he is in no mood to try and argue with stubborn westerners.

We swim to greetings and have the most ecstatic Darshan of Lord Nrsimhadeva, Pancha Tattva and Sri Sri Radha Madhava ever. The few remaining devotees shout as the curtains are drawn open. Someone brought a boat and the smaller children circumambulate the Deities in floating fashion. We see two of those famous (or notorious?) water snakes also circumambulating the Lord, gliding in zig-zag fashion. (A few devotees carry sticks to push them away if they should come close). Kirtana is ecstatic - jumping and splashing in the water. And the Deities look the most beautiful ever....dressed in pink and blue flower outfits, very simply, without any of the usual flower garlands (no flowers for obvious reasons) and just a small bouquet in Radharani's hand.....the Darshan is sweet and intimate.

We return to the room to pack, alarmed that the water is rising so rapidly. The fences and signboards are going under. Water is coming into the first floor already. We manage to get a boat. Contrary to expectations boats are scarce, very small and we cannot take much luggage. Our boat totters 2 cm above the water as we have four bags, an accordion, 4 adults and one boy on board. We manage to balance things and if anyone dares to move an inch the boat topples and water comes pouring in. Balanced like this we set out towards the road....

To our shock and amazement we are told the road has gone under and there is no way any vehicle can travel on it, we have to row all the way to Rajapur (the next village). The boatman is not sure which way to go. We row in circles....now the full extent of the flood becomes visible....I have never seen such a vast expanse of water, I feel like one of the seven sages on King Satyavrata's boat.

Who is our Matsya? The Holy Name. My husband, Shastra dasa, takes his accordian (wow - that move nearly toppled over the boat!) and we have kirtana all the way. Ramananda Raya (my son) nearly falls asleep apart from the ants that nibble him awake. Ants? Yes, the tree tops are black, full of insects trying to save themselves. Huge black ants try to cling to any floating object....no one wants to die.

The boatman does not know where he is going. My husband is contemplating what to grab if we should hit any rooftop or other object we cannot see under the water - should he grab our bags with the books that we do not want to get wet, my son who cannot swim, or his wife who might need help ...just keep on chanting.

We finally spot some people in the distance. Some locals approach us, vehement exchanges of words take place in Bengali, we do not understand a word but it is clear the boatman has no idea where we are.

More people come wading through the water to push us. Finally we reach a shallow area with water rapids...we are told to climb down. We wade through the water holding on to each other and the locals help to push the luggage on the boat.

After some time we manage to spot a rikshaw, and I cling to the bundle of rupees in my bag - I know the few pieces of paper is what is going to save us - it will convince the rikshaw man to push us through the water with his bicycle half-submerged. In the time of the flood the last few food items available will fetch high prices, and money is a good commodity to have, he will be most eager to earn a last nice sum of rupees.

Two rikshaw men agree and they load us all onto the rikshaws. I cannot believe the flood had spread so far. Now we are heading along what used to be the road, and we pass hundreds of local villagers. I feel great pain in my heart as I see old ladies trying to carry bundles above the water level. There is a patch of dry land left near the Gaudiya Math, and all the cows from the villages have been taken there.

My heart breaks when my husband tells me that the General Manager of Mayapur, Nitai Prasad Prabhu, had informed him that the Government had opened another dam so the second inpour of water was expected later in the day. The villagers do not know this but I know that soon that last patch of land will also be under and the cows will have nowhere to go.

Children seem happy swimming around in the water, but I see the anxiety on the faces of the men. All the houses have been destroyed and everyone is trying to take shelter of the few high buildings (mostly temples) sticking out.

Ramanada Raya cannot believe his eyes. "Mama, everywhere is becoming Ganga!" he says. I ponder about the deeper meaning of the flood. Mother Ganga is visiting all the Deities in the different temples, she is uniting her devotees together at those temples completely depending on the Lord's mercy, but she is also purifying everything, liberating many living entities, and purifying us.

I start worrying that even Rajapur which is on a higher level and normally stays dry might be under by now....but I thank Krishna as I see people walking on dry land in the distance and a few vehicles around.

On the long, dangerous road to Kolkata, where there are no left- or right hand lanes, where taxis, buses, huge trucks, horses, rikshaws and cows drive, walk, dodge and hoot at breakneck speed, navigating around huge potholes, I wonder whether it would have been safer staying in Mayapur....better drown in a flood than leave your body on this hellish road!

But today in Kolkata I think about all those still left in Mayapur, about how they will survive, about the cows and old ladies, about the children who might get pneumonia or starve, and about the villagers who have lost all their houses and property, how some western devotees might still be there, not having the money to pay for travels to other parts of India.

We are still receiving news that the water levels are rising more....now it is being said that it will be the biggest flood ever, bigger than the 2000 or 1978 ones. Please keep Mayapur in your prayers and support any Flood Relief or Flood Repair programs they might have. It will cost millions to repair the damage. ISKCON has some FFL operations already going, so please support them.

Please check their website at www.Mayapur.com to get updates.
Posted by krishna1008 at 5:07 PM