PADA: Yep, Anuttama quotes -- Anuttama? Anyway, here we go. This period, around 1987 starting intensely in the media with Kirtanananda ex-swami, is where the bogus GBC gurus really started saying in the media: Acharyas are deviating, acharyas are criminals, acharyas are not following the principles, acharyas are being censured for having illicit sex etc. -- in other words, your local trash man is more advanced than the acharyas! And Anuttama, Jayadvaita, Hari Sauri, all these folks were behind this idea to paint the acharyas as debauchees. Gurusuh narah matih naraka sah, anyone who says acharyas are ordinary mundane falling down men, is a resident of hell (narakah). ys pd 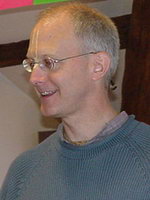