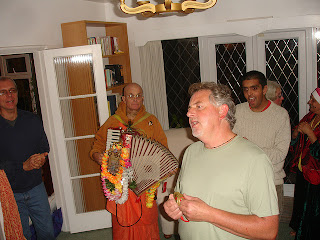 [PADA: "Mahavishnuswami.com" no longer operates apparently because he did not pay the bill to keep the web site open. We find that the real reason Mahavishnu swami supports all the GBC molester acharyas program is that he was made a sannyasa and a guru by Jayapataka:]

Encouraged by his godbrothers in 1984 he accepted the sannyasa order of life from his senior Godbrother HH Jayapataka Swami Maharaja. Sannyasa means being a completely renounced monk whose duty it is to travel and preach. He is still supposed to be the ISKCON Regional Secretary for Nepal and Bihar and is happy to serve under HH Prabhavisnu Swami and HH Jayapataka Swami's who are his GBCs in Nepal and East India.

[PADA: Supposed to be the leader, ummm, no one knows if he is a leader or not? What kind of managing is that, he is supposed to be a manager, but maybe he is not?]

In 1990 he accepted his first disciple as Srila Prabhupada had wanted his followers to also guide and initiate others in Krishna Consciousness. He took up this task in the spirit of being one of Prabhupada's "monitor" gurus. Now he has initiated over a 100 disciples.

[PADA: Formerly the GBC said they were full fledged diksha gurus, now they are saying they are merely (students not professors) ... monitors, ok that means they are more or less like priests, aka ritviks. This is good. ys pd]