Hanuman Croatia argues with himself 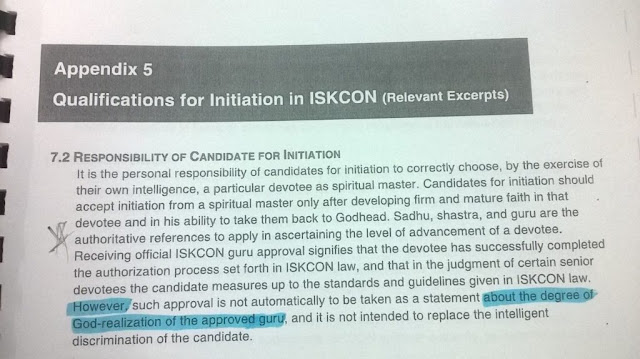 Hanuman Croatia: TRANSLATION: Senior devotees have approved authorization process that authorized person is approved as guru because certain approvers are seniors. But, having been approved by approvers doesn’t signify that approved guru is actually approved. Rather, approval doesn’t mean much, it is just an imagined process, since Prabhupada never instructed anybody to approve gurus.

But, we will approve anyway, but approval doesn’t mean much, we approve, but if approved guru becomes a sannyasi with girlfriend, that is your fault that you selected him as your guru. Why did you do that? Because he was approved? Since approved guru is not actually approved, we don’t feel any urge to disapprove Sacinandana Swami and his girlfriend from the guru list. After all, it is your fault that you accepted approval done by approvers as something approved.”

[PADA: Right, so why does Hanuman Croatia keep telling us we have to accept his post 1977 gurus -- other than Srila Prabhupada -- when that would prove he is doing the same thing as the GBC, concocting gurus? Who authorized Hanuman to rubber stamp gurus, just like the GBC is doing? Hanuman says what the GBC says, we cannot worship Prabhupada, we need to worship someone else, who authorized him to promote someone else?

Same problem we have with Torben, we have to accept his post 1977 gurus, but who authorized him to rubber stamp them? Yep, Hanuman / Torben approves fake gurus other than Prabhupada, they are doing the same thing as the GBC. Worse, Torben now says we need to follow Rocana's program of accepting gurus who are under the GBC judicial watch committee. Didn't this same group of folks rubber stamp sexual predators and deviants as their acharyas? ys pd]

Anyway did we forget to mention, the judicial watch committee allows all sorts of deviants to be their gurus. Torben does not even understand that the guru is not the subject of monitoring of a judicial committee, because the guru is not a conditioned soul. Now Torben says "there is no difference between my guru and your guru" because his illicit sex judicial watched gurus are the same as actual acharyas? Its also amazing that Torben think our devotees are bogus for reading Prabhupada's books, they have to do what Rocana does, and allow reading of the books written by people under the GBC judicial committee.Does Torben have any idea what is in these books? Rocana's guru watch committee allows all sorts of bogus books, lectures and speaking, but we are bogus for having people read Prabhupada, why does Torben think this is the way forward? ys pd