[PADA NOTE: Not all ISKCON temples have agreed to the SAC reverse order offering process. Gaura Keshava has instituted this in some places, meanwhile there is another SAC forming in India which is not in agreement with Gaura Keshava. Meanwhile a leader of the new SAC has recently rejected his guru Gopal Krishna swami. OK there is a lot of infighting going on here.] 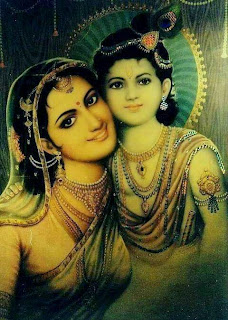 Cannot be worshiped via a broken or corrupt chain

[PADA: Yes, ISKCON is de facto ritvik. The SAC (Shastra Advisory Committee) for example reversed the order of bhogha offerings, people now offer bhogha direct to Krishna first instead of the GBC guru. The SAC's idea is -- that's just in case your "guru" is having illicit sex and he is smoking the happy weed, then in that case your offering still goes direct to Krishna.

They reversed the order to produce a process for circumventing the problem that their gurus are falling down left, right and center. Rocana just now produced a "constitution" where he says their acharyas will be just like ritviks -- subject to censure, correction, suspension, monitoring, removal etc. -- so he is also promoting de facto ritvik ideas.

Problem with that is, this offering process is a concoction, and its the exact opposite of the system established by Srila Prabhupada. He said we have to offer to the guru first or its not accepted by Krishna.

Anyway, this devotee is correct, the current system in ISKCON is a fabrication put together with band aids, chewing gum and wires, and its also de facto ritvik, since their gurus are subject to monitoring, censure, suspension, removal, excommunion etc., and these are rules that ONLY would apply to priests (ritviks) and not gurus.

This is sort of good news, it means ISKCON is adopting ritvik de facto through the back door, they just cannot admit that we were right all along. We also have a few friends in ISKCON temples who asked us about this, and we told them to reverse the order of their worship, going first to Prabhupada and then to Krishna, but keep it a secret so the GBC Gestapo will not be alerted. ys pd]

I have just returned from a trip to India and something dawned on me, and without trying to spark controversy amongst us. Of course, that is very easy to do in these days of Kali-yuga.
I visited different temples, ISKCON and Gaudiya Matha. In each temple I noticed something: for instance in the Matha of Srila Sridhara Maharaja, there was a picture of Srila Bhaktisiddhanta Sarasvati Thakura Prabhupada, then there was a picture of Srila Sridhara Maharaja and then a picture of Bhakti Sundar Govinda Maharaja. That is their parampara.

So then I visited our temples, ISKCON, and on the altar we have a picture of Srila Bhaktisiddhanta Sarasvati Thakura Prabhupada and a picture of Srila A. C. Bhaktivedanta Swami Prabhupada, and then it stops. There is no ongoing picture for an ongoing acarya in ISKCON. I had not really thought about this and then it hit me. Is the whole of ISKCON Rtvik? Are we all Rtviks to some degree or another? However, I have to say that when I visited Odisha, the ISKCON temples had a permanent picture of Gour Govinda Swami after Srila Prabhupada. I do not know if it was just because he was preaching there or what.

So then I thought that I would do a little investigating. I went to these temples again and asked them about the pictures on the altar and I said, "Isn't Srila Prabhupada the Acarya for the next 10,000 years?" A fair enough question I surmised. Their answer, "...maybe in your ISKCON but not in our sanga..." A fair enough answer...! So I went to other Gaudiya temples and posed the same question and received the same answer. Then at one temple they said to me, ever so politely, "...Your ISKCON mission is full of Rtviks, from the top to the bottom, because you think no other acaryas can appear, therefore you are all either Rtviks, hidden Rtviks or some sort of Christian/Krsna mismash...

Just like in Christianity they have had no parampara for 2,000 years. How do we know what was said 2,000 years ago? The gap between Jesus Christ, the Popes and Cardinals is becoming larger and larger every year. The bible has been changed 14,800 times when compared to the original Sinai bible [someone has done some homework] of which there is only one copy in the London Museum."

This devotee obviously knew what he was talking about, he said that it was common knowledge the Emperor Constantine was not a Christian per se, and when he died he took both last rites: The Christian rites and the pagan [non-christian] rites, just so he had all his bases covered. He was a politician not a sadhu. Anyway he explained all this and more to me very nicely. I actually had no comeback on all this Christian info. And then he listed many Jesus Christs of the time period and then said to me, "which Jesus Christ are we talking about? And smiled. As far as I understand now, that was a very popular name 2,000 years ago.

So I was wondering, as a fallen conditioned soul: will we ever have a picture of an acarya next to Srila Prabhupada on our ISKCON altars? Or will there just be an empty photo frame with a large question mark in it? Are we really all Rtviks or hidden Rtviks, or some sort of Christian mis-mash? Will the gap between Srila Prabhupada, and the aspiring devotees, GBC included, grow larger and larger as the centuries roll on? Will the message become lost? The same as Christianity?

I am open to answers.

Many of you may be aware of health challenges H. H. Jayapataka Maharaj is going through, who is a dear disciple of His Divine Grace A. C. Bhaktivedanta Swami Prabhupada. H. H. Jayapataka Swami's health condition is stable now and he is safe amidst a team of specialists in Delhi. His strong desire though, is that he be able to again go out and preach. He has requested all well wishers and disciples to take up more service on his behalf if they would like to see him able to do the same. Once Maharaja was preaching to his disciples that '"yes I'm in this condition because of my disciples... and it can be undone also if they perform more devotional services on my behalf."

"I am suffering because of my disciples, but I can recover from this by preaching to thousands of people, or if my disciples perform MORE DEVOTIONAL SERVICES, then all this karma will be burnt in no matter of time."
[PADA: Right, Srila Prabhupada said that if we take karma without authority we will get sick, fall down, or both. This is another issue the GBC has yet to resolve, that they are not qualified to take others' karma. ys pd]