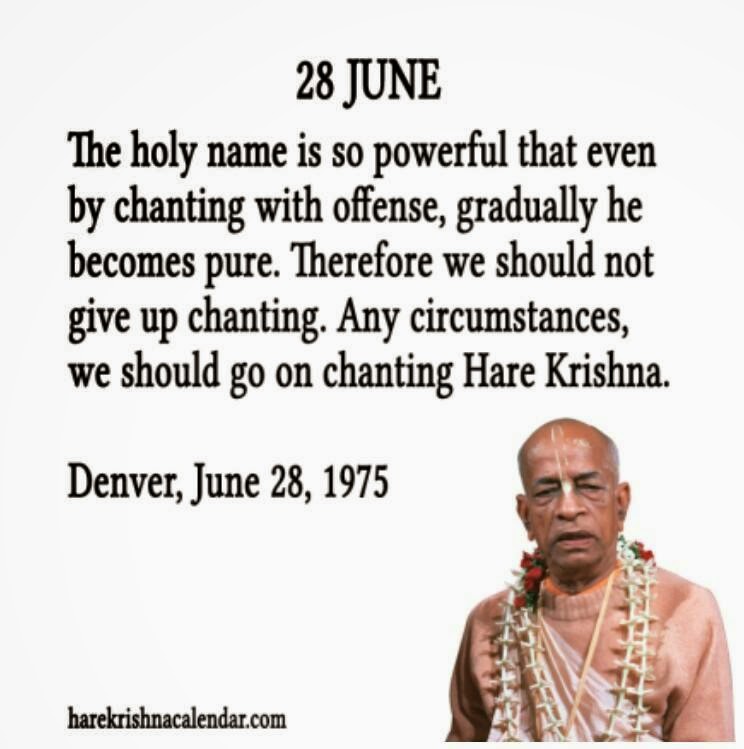 Yes, go on under any circumstances, right!

PADA: This is always a big topic among various groups of devotees: is PADA editor a crazy lone wolf in the darkness, whom no one cares what he says? And the answer is, its all depends?

1) This all started when we first of all said (around 1979) that "Jayatirtha is not a pure devotee, he is engaged in illicit sex and intoxication." At that time, almost all the "senior" devotees disagreed with us and they often said: "This offends all the GBC; It is craziness; It is apa-siddhanta; It is against the orders of Srila Prabhupada," -- etc. etc. etc. ad infinitum. Yep, and our critics included the bulk of the senior "advanced devotees" who did not think anyone should publicly challenge the guru status of Jayatirtha.

Fast forward in time, and later on Jayatirtha was murdered (decapitated) for having illicit sex with someone's wife, and his murder became a HUGE news media story in all the big UK / EU / Europe newspapers, some with the title "Guru's Head Hacked Off." That means, who knows lets say 25 million -- maybe as many as 50 million people worldwide -- eventually read the "Jayatirtha's head chopped off" story and they ALL agreed with our version FULLY, i.e. Jayatirtha was not EVER a pure devotee. OK MILLIONS AND MILLIONS of people agreed with PADA and not our opponents. Do we win the numbers game? Yep!

Today, we rarely meet even one person who still feels Jayatirtha was a pure devotee. OK, except some years back when we met with one of his hanger on groupies, who tried to tell us Jayatirtha had been the only pure devotee successor to Prabhupada in ISKCON (this same devotee tried to commit suicide at one point and failed). OK fine, so the score so far is -- maybe 25 - 50 million agree with PADA, and only one or two isolated "hangers on" do not. We won that one hands down, easily -- millions agreed VS one or two who do not.

2) Around 1980 we said that Kirtanananda is a fraud guru, and at that time we even warned Sulochana not to set up camp and live there. Yep, how'd ya guess? Most folks said we were bogus, rascals, offenders, blah dee freakin blah-dee. Fast forward to 1986 when the Federal Marshals raided his place, then that news story was in all the major medias of the West, including a TV show I did with 23 million  viewers. Lets say -- easily -- 100 million people read / heard / saw the story and they all agreed with us, i.e. Kirtanananda is not a guru.

How many people today think we were wrong? OK not so many, thus -- once again -- we won that one hands down. Millions agreed with us, a few hold outs do not. Why the mass of devotees did not help us expose and remove Kirtanananda before it came to this state, I cannot say why. But the bottom line is, almost everyone eventually agreed we were right, Kirtanananda is not an acharya.

3) We later on said that actually all of the 11 gurus are bogus, and NONE of them were appointed as gurus. Yep, initially almost everyone said this is offensive, this is against Srila Prabhupada's appointment order, blah and blah etc. etc. etc. Fast forward to the publication of "Monkey On A Stick" and the Rolling Stone article "Dial Om For Murder," and once again MILLIONS of people agreed with our version, the entire body of 11 is bogus.

How many people today agree that these 11 are bona fide? Yep, not hardly anyone. OK we won that round also on the level of MILLIONS VS only a few. Shot that one out of the ball park really, because not only millions of public but also thousands of devotees agreed with us, and so they abandoned the GBC's gurus process wholesale, there was a mass exodus of GBC's guru followers. Notice the score, we again won that issue with MILLIONS who agreed VS, ok only a few bone head supporters of the 11 left in the USA. Sulochana said we were going to need the help of the police and public to oppose these gurus, he was right, on our own -- OK we could get killed.

4) Sulochana said that people like Bhakta das were helping the GBC gurus and were therefore "in bed with the enemy." According to Sulochana, the New Vrndavana "drug dealers" were getting supplied with some of their "designer drugs" from Bhakta das. These designer drugs are supposedly something like Procaine, a Cocaine like drug, problem being -- it has sometimes worse effects than Cocaine, including women having defective babies, people going into permanent mental instability and so on.

One of Jayatirtha's people was under the influence of these drugs and he pulled out a gun in a theater and he wanted to date the star (Justine Bateman) of the theater show. A SWAT team had to subdue him. Of course Jayatirtha was part of this designer drugs program as well. Birds of a feather.

In short, Sulochana was infuriated with people like Bhakta das for aiding and abetting the New Vrndavana regime by working to help their drug business. OK, later on Bhakta's drug business was busted by the Federal Marshals and the story of his "drug bust" was in all the big California and other newspapers. Yep, once again MILLIONS of people agreed with PADA that Bhakta das is a lousy human being, at best.

Later on Bhakta das was arrested in Puri India, and his arrest story was in all the major newspapers there, and once again MILLIONS OF PEOPLE agreed with PADA that Bhakta das is a lousy human being. Of course we have a few idiots trying to revive Bhakta das as their shiksha guru, but how many are in this group? Half a dozen maybe? Sorry we ALREADY have millions on our side, its that simple.

Have we got to a billion agreeing with us yet? Maybe!

5) When we said there is a problem with the book changes, yep, thousands of devotees agreed.

6) When we said Srila Prabhupada is complaining of being poisoned, yep, thousands agreed.

7) When we said there is a molesting problem, yep, once again we were attacked by "the senior devotees" for saying that. Sorry to report this but MILLIONS OF PEOPLE later on agreed with us that these leaders were orchestrating abusing children. And yes, a number the children victims blamed God for that abuse regime -- because of all these anti-PADA folks who were compromised with the abuse regime -- who did not help us dismantle that regime, and they made it look like God wanted this regime.

Its unfortunate that all this above, starting with our original 1979 problem with Jayatirtha, has had to be made public -- but as we see, there is often no other recourse since we are often being attacked if addressing these things internally.

To sum up, no we are not lone wolves in the dark with no one hearing us. Millions of people agree with what we are saying, and we were recently on the Discovery Chanel with MILLIONS OF PEOPLE hearing us describe the New Vrndavana problems. The real question is, how many more millions do we have to convince before some of the last hold out "advanced devotees" start to agree with us? ys pd
Posted by krishna1008 at 7:09 AM