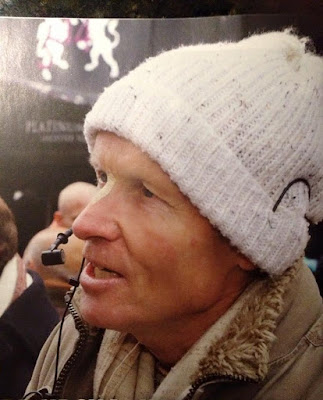 B Dasa: Home now after Bhagavatam class. Of course the sudden passing of kaliyaphani was on all the devotees minds and Tamohara prabhu changed the class into a memorial for the great devotee kaliyaphani.

On the way home I turned off onto a sandy road, right where the accident occurred. And I saw a piece of kaliyaphani’s motorcycle fairing there, so I stopped and got it. Something to remember him by, and to hopefully to remember that either oneself or any devotee is so valuable -- but they can be gone at the blink of an eye - so try hard now!

He had a dark green Triumph motorcycle, from England where he also comes from. I have had the good fortune to go to his room at the men’s ashram and talk with him and he came to our house.

DS: We mourn. But it is a valid point about motorcycle danger. KP did admit to me about having a propensity to "tempt death." And he spoke of doing 110 mph on SR 237 near the temple here, and it's a very bumpy and old road. Devotees testify that they were driving that same road already going OVER THE SPEED LIMIT, when suddenly KP suddenly appeared from behind, passing them like a rocket and disappearing into the distance. Srila Prabhupada stressed safe driving.

[PADA: Which of course begs the question why are "senior devotees," who are approaching retirement age, out there riding super fast motorcycles and "tempting death"? It seems to be a little odd for a Krishna devotee to be engaged in this manner, especially one who is supposed to be a senior and elder. Its not setting a good example to be speeding past people -- who are already speeding -- on a motorcycle, which offers little to nil protection in case of a bad crash.

That being said, there are much worse things that some so-called senior devotees have engaged in. In any case, its over now for him and we wish him a happy future, wherever that may be. Maybe he wanted to accelerate moving onto his next life's station, hence his "tempting death" program. That would mean, like a lot of people, he was not happy with the current imbroglio that ISKCON has become and so he wanted to get out of here faster. I dunno, just saying its possible. ys pd]

Hare Krsna. This morning (January 4, 2019) I (Dhira Govinda dasa/David Wolf) felt deep sadness hearing of the passing away of Kaliyaphani dasa Prabhu (Mr. James Russell). I first met Kaliyaphani in 1991, when he visited Brooksville, Florida, from England, and we served together in the Krishna Fest program. Twenty-eight years later I retain vivid impressions of many things he said in those days. He never tried to be profound, yet his offhand, casual remarks contained rich pearls of wisdom. And of course his kirtan was sublime, as is known throughout the world, perhaps the three worlds.

Again Kaliyaphani travelled to Florida from England early in 2003, to participate in the Satvatove Foundational Seminar in February in Gainesville, and the first Advanced Seminar in North America, in March, in Alachua. In this way he was amongst the earliest, most enduring, and most enthusiastic supporters of our efforts in the field of giving the world spiritually-surcharged transformational programs. In the mid-2000s Kaliyaphani served as an assistant for Foundational and Advanced Seminars in Europe, including France and Ireland.

During the summer of 2004 I was in the south of England at an outdoor youth festival, to conduct two back-to-back Foundational Courses, in a big tent. My accommodations consisted of a small tent, a very small one; it seemed to me, about 3 feet wide, and perhaps 18 inches high. (I mean, austerity is great and all, but this was far over the edge, at least for my limited capacity to sacrifice comforts.) And as night of the first day approached, rain poured incessantly. Kaliyaphani saw me in the rain, looking at my tent, forlorn, not knowing what to do. He calmly insisted that this would never do, and he drove me to his step-mom’s home, nearby, and thus for the week I enjoyed his close association, and the homey comforts of English hospitality.

Kaliyaphani did struggle with doubts, senses, and moods. He was authentic in sharing these, and sometimes I got a sense that they were an expression of his humility, as, from my perspective, his diamond-like devotional qualities consistently shone.

After a post-Advanced Philosophical/Spiritual Roots program, with about 35 participants, Kaliyaphani expressed to me with such excitement, that he palpably saw, during that program, bhakti-lata-bijas (seeds of devotional service), in heart fields clear of weeds, sprout, grow and flourish. His enthusiasm, for himself and for engaging others, for both processes of bhakti- watering the flowers, through sravanam and kirtanam (hearing and chanting), and pulling the weeds from the garden of the heart- is rare, and an inspiration. I’m moved and forever impacted by Kaliyaphani’s happiness in seeing others engage in Krsna consciousness.

Today I conducted a transformational seminar. Hearing in the morning about the soul Kaliyaphani dasa leaving his body moved me to greater urgency to emphasize and communicate, through my facilitation, the vital importance of that which is enduring, that which will never be crushed by time. And that’s the same effect Kaliyaphani had on me in our association over the 28 years.

In writing this, I’m feeling moved by Kaliyaphani’s fluency with shlokas (Sanskrit, Vedic verses), and his engaging way to communicate their essence. Hare Krsna. To Kaliyaphani I personally offer this excerpt from a letter from his spiritual master, Srila Prabhupada, dated January 10, 1972, from Srila Prabhupada while Srila Prabhupada was in Bombay- “…One thing is, that I want that the highest standards of devotional service be maintained. Our routine work—rising early, cleansing, chanting, temple worship, sankirtana, study—these things must go on very nicely, and if they become improved more and more, and are not neglected or in any way decreased, then now become very convinced of our Krishna philosophy and very enthusiastically and soberly maintain temple routine standards, increase book distribution, satisfy the devotees, and in every way become the perfect KC example of angel.

“I am very encouraged that so many new boys and girls are coming forward to join our Hare Krishna Movement. That is a good sign that you are advancing very nicely in Krishna's service. In this way go on—Krishna life is the very highest type of activity of the living entity, the topmost development of consciousness, so I am very much appreciating that you are becoming yourself Krishna Consciousness and that you are helping me in this way. Thank you very much.

I hope this will meet you in good health and cheerful mood. Your ever well-wisher, A.C. Bhaktivedanta Swami”

Kaliyaphani’s final days, weeks and months were characterized by simple, joyful, sober presence and complete absorption in the names of Krsna- Hare Krsna Hare Krsna Krsna Krsna Hare Hare Hare Rama Hare Rama Rama Rama Hare Hare. From what I hear, his final moments in this body also, were an immersion in the perfection of human life, remembrance of Sri Krsna, the Supreme Personality of Godhead. We can honor Kaliyaphani by aspiring towards such simple, joyful presence in the transcendental names of the Divine. Kaliyaphani Prabhu, ki jaya! Hare Krsna. Sincerely, Dhira Govinda dasa (David Wolf)