[PADA: One question we get sometimes, how come some of your God brothers want to have you killed? There are some interesting stories in the Vedas about how sometimes brothers can become mortal enemies.

It happens. Anyway, this is an interesting summary of how this type thing can occur:] 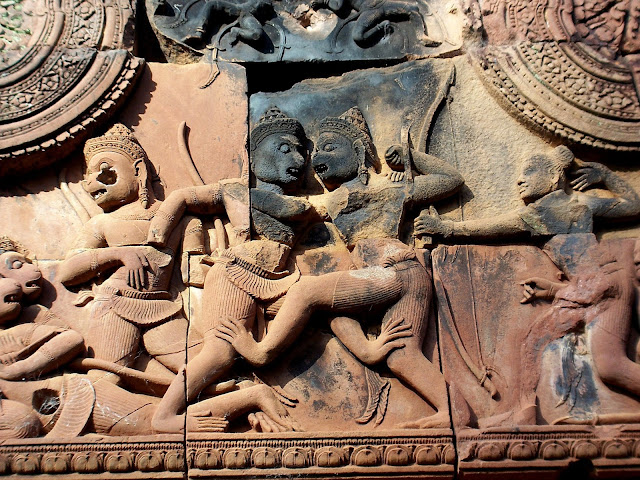 "Sugriva and Vali Have A Disagreement"

Rama Meets Sugreeva
Vali ruled the kingdom of Kishkindha; his subjects were the vanaras. Tara was his wife. One day, a raging demon by the name of Maayaavi came to the gates of the capital and challenged Vali to a fight. Vali accepted the challenge, but when he sallied forth, the demon fled in terror into a deep cave. Vali entered the cave in pursuit of the demon, telling Sugriva to wait outside. When Vali did not return and upon hearing demonic shouts in the cave and seeing blood oozing from its mouth, Sugriva concluded that his brother had been killed. With a heavy heart, Sugriva rolled a boulder to seal the cave's opening, returned to Kishkindha and assumed kingship over the vanaras.

Vali, however, ultimately prevailed in his combat with the demon and returned home. Seeing Sugriva acting as king, he concluded that his brother had betrayed him. Though Sugriva humbly attempted to explain himself, Vali would not listen. As a result, Sugriva was ostracized from the kingdom, Vali forcibly took Sugriva's wife Rumā and the brothers became bitter enemies.[1] Sugriva then goes on to live on Rishyamukh as it is the only place on earth that Vali cannot tread on. Vali was previously cursed by Sage Matang and hence cannot lay a foot on this piece of land. Doing so would cause his death.

Rama and Lakshmana Meet Sugriva at Matanga's Hermitage
In exile, Sugriva made the acquaintance of Rama, the Avatar of Vishnu, who was on a quest to rescue his wife Sita from the demon Ravana, king of the Rakshasas. Rama promised Sugriva that he would kill Vali and would reinstate Sugriva as the king of the vanaras. Sugriva, in turn, promised to help Rama with his quest.[2]

Rama Kills Valli and hands over the kingdom to sugriva

Killing of Vali vanara
Together, Sugriva and Rama went to seek out Vali. While Rama stood back, Sugriva shouted a challenge and dared him to battle. The brothers rushed at each other, fighting with trees and stones, with fists, nails and teeth. They were evenly matched and indistinguishable to the observer, until Sugriva's counsellor Hanuman stepped forward and placed a garland of flowers around Sugriva's neck. It was then that Rama emerged with his bow and drove an arrow through Vali's heart. When Vali had expired, Sugriva reclaimed the vanara kingdom, took back his wife, Rumā and took over Vali's main wife, Tara, who became empress and her son by Vali, Angada, who became crown prince.[3]