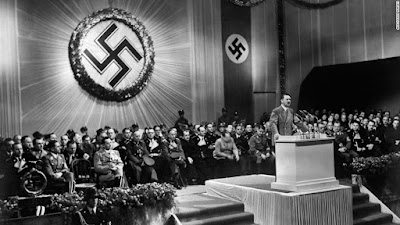 Yep, meditating on this is going to fix everything!

[PADA: Another "ritvik devotee" was advertising Mukunda's (UK) "Hitler videos" and a disciple of Jayapataka challenged that this is -- racism, mundane politics and Nazi-ism. Unfortunately, I had to join the side of the Jayapataka follower, because his points were spot on.

Meanwhile another "ritvik devotee" told me that I need to listen to Mukunda's videos since he is "the biggest expert on the topic of Hitler." OK maybe, but Srila Prabhupada says Hitler is "less than animal" (see quote below), so Mukunda is now an expert on "less than animal consciousness"? And thus the world needs to study "less than animals" to become better? As Sulochana said many times, we cannot discuss things like Hitler because it will ruin sympathy for our cause. In any case, Hitler identified with his body and race, which Srila Prabhupada says is animal consciousness, we are spirits and not these bodies.

Worse, Mukunda dasa is really a teeny peanut compared to the real expert, Hansadutta dasa, who has actually been the biggest authority on Hitler in ISKCON. And he was reading all sorts of books about Hitler all the time, especially in the 1970s. When Hansadutta's German Schloss was raided by the police, they found various books about Hitler. And subsequently Srila Prabhupada heard about all this (it was in Europe's newspapers) and he was so upset, he wrote in his Bhagavatam at that time that we should not read ANY books about Hitler. Apparently Mukunda and his team know more than the acharya, so they kept on reading?

And what was the result of Mukunda's mentor Hansadutta studying about Hitler all day and night? Hansadutta wanted to make another Fuhrer for the planet, and so in 1986 Hansadutta decided that Kirtanananda is the only pure devotee / Fuhrer for the planet and then he moved 90 percent of the Berkeley temple devotees to New Vrndavana (which Berkeley temple has never recovered from and its still lacking in manpower). So all of this meditating on Hitler helped what exactly? It helped create more illusion, confusion and foolishness.

And no small amount of criminal activity!

OK and at that time Kirtanananda was being covered with the hands of fifty boys while he sat on his big Vyasa seat, and so many crimes were going on there no one could count them. This is exactly what Srila Prabhupada says, less than animal consciousness. Sulochana said worship of a dog would have been superior to this Hansadutta /  Kirtanananda program, because dogs will befriend and lick a devotee out of affection -- and not kill him, whereas these people will kill the Lord's Vaishnavas. And their program did kill some Vaishnavas.

Less than animals fer sure!

So the result of being an expert at meditation on Hitler simply means, Hansadutta's misdirected thinking got even more misdirected, that's all. The madness simply increased. Anyway, this is great, these guys are simply becoming experts on "less than animal consciousness," and we become what we meditate on. That means they have a long way to go to meditate on the more advanced platform, the animals, which is WAY too far an advanced state of consciousness for them to ponder at this stage.

The JPS disciple was right, on this point at least, meditating on Hitler is simply mundane politics, or worse, it can make persons try to make fools into their Fuhrers. Yep, we need to meditate on Hitler's history, so we can join with Hansadutta's history, and become more insane? Srila Prabhupada says this meditation is not going to help us, and it isn't.]

Prabhupada: Is that rational, that another living entity like me should be killed for my benefit, for satisfying my tongue?

Syamasundara: Their idea is that the animal is not in the same category as myself because it has no...

Prabhupada: So that's alright; then might is right? Hitler is right? When Hitler, Hitler kills the Jews, he's right? He thinks that they are not in my category.

RP: Actually Prabhupada acknowledged that so many propaganda was made against Hitler. Prabhupada is right as always

P Das: Yes here in this quote he is especially right. Anyone who discriminates based on race is less than animal. Just like some foolish devotees are feeding other foolish devotees that Prabhupada loved Hitler and hated the Jews.

[PADA: Right, this is how the Sanat / Mukunda / Prahad program is trying to harm the preaching of the sincere Prabhupada devotees who have been preaching in Israel, by trying to make it difficult for them to progress there by linking Krishna to their Nazi process. Its already difficult for any of us to preach as it is, and they want to make it even harder for the preachers. In any case, since Hitler consciousness is less than animal, why are they promoting less than animal consciousness?

The way to fix the world is to promote less than animal concept of life? Hitler thinks others are not in his bodily designation category, because he is on the bodily concept of life, ... which Srila Prabhupada says is animal consciousness, or less ... when these animal conscious folks become aggressive and attack others based on bodily identification.]

"The whole history of the world, you just study, is a history of sense gratification. Just take, for example, some twenty years ago one Mr. Adolf Hitler came in the scene, and there was great upheaval as war in Europe and America. From 1933 to 1947 or something like that, the whole world was in trouble. But he is gone, finished. And what did he do? Sense gratification, that's all.

[PADA: Right, what was accomplished?, sense gratification, and worse -- many people were also slaughtered. And Srila Prabhupada says this is due to accumulated sins. Why should we glorify this tragic mess as something wonderful?]

P Das: So Srila Prabhupada also says Hitler is less than an animal, pick what quotes u want. For example, when the circumstances are that you live in Germany in the 1940's and are of Jewish origin and are captured by Germans and killed in a concentration camp just because of your bodily designation, then probably your family will be more inclined to accept the statements that Hitler is less than an animal.

[PADA: Right, Hitler died of apparent suicide in a bunker unable to execute his plans, and Srila Prabhupada said leaders who make others fight for them while they sit in a bunker are simply examples of Kali Yuga, the King should be at the front of the Battle. We should glorify false Fuhrers, who kill themselves?]

P Das: Preaching means making disciples Prabhupada says. What is the use of "so many clicks" if no one is following? Let us make disciples for Srila Prabhupada.

[PADA: Right, Prahlad dasa says that their Hitler videos are doing great preaching because "they get so many hits." Yep, and so do the Miami beach bikini contest videos. They are not making functioning preaching programs, neither that can be accomplished by making Hitler videos.]

[NOTE: Hitler helped Communist Russia take over and become the dominant power in Eastern Europe. The history of Poland from 1945 to 1989 spans the period of Soviet communist dominance imposed after the end of World War II over what had become the Polish People's Republic. These years, while featuring general industrialization and urbanization and many improvements in the standard of living in Poland, were marred by social unrest and severe economic difficulties.

Near the end of World War II, the advancing Soviet Red Army pushed out the Nazi German forces from occupied Poland. In February 1945, the Yalta Conference sanctioned the formation of a provisional government of Poland from a compromise coalition, until postwar elections. Joseph Stalin, the leader of the Soviet Union, manipulated the implementation of that ruling. A practically communist-controlled Provisional Government of National Unity was formed in Warsaw by ignoring the Polish government-in-exile based in London since 1940.

PADA: Anyway, I already know the facts. The soviet satellite states. The communist empire was increased. WW 2 killed millions of people. Its not a good thing for vaisnsvas to get entangled in. Promoting Hitler is already causing some outside people to write me asking, what is going on with this agenda? Its alienating more and more people, as if the gbc has not done enough of that already.]

M Das: This Mukunda prabhu (UK) is "little" Bit to heavy on that topic and PADA told me that he had had sex in the holy dham with a women and not his wife. But especially on that topic on Hitler, Mukunda Prabhu has the best research done and he understood Prabhupada's mood how he has done very difficult acrobatics dependent on audience.

PADA: Srila Prabhupada was upset when Hansadutta's Schloss was raided and the police found a bunch of books about Hitler. He wrote in his Bhagavatam at the time, we should not read about these Hitler people. So history may have been manipulated by the karmis, its not our job to rectify that, its maya. ys pd]