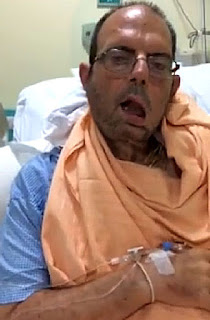 Jayapataka Swami is one of the original eleven fraudulent successor “acharyas” who claimed that Srila Prabhupada had appointed them as the next initiating gurus for ISKCON. This was a BIG LIE, in which Jayapataka participated, and which was admitted by the GBC in 1990. This was not a simple misunderstanding; it was a conspiracy by senior men, including Jayapataka, to highjack the movement and install themselves as Srila Prabhupada’s inheritors.

This was a great fraud and spiritual crime for which Jayapataka has never made any explanation or apology. Jayapataka is believed, at a high-level of certitude, to be involved in Srila Prabhupada’s poisoning, suspected because of the evidence that implicates him, as well as his placement in the center of the unauthorized guru takeover of ISKCON.

If someone gets a share of the stolen money from a bank robbery, it is quite clear they were involved in the robbery, even though perhaps not amongst those who held up the tellers with guns. Jayapataka is a natural person of prime interest in Srila Prabhupada’s poisoning.

JAYAPATAKA IDENTIFIED IN THE THIRD PRIMARY AND CERTIFIED “WHISPER”

Hansadutta, Bhavananda, and Jayapataka are in the room when the poison whispers take place. In one instance on the last conversation tapes, Jayapataka is heard speaking with Srila Prabhupada in the background, not as whispers, but in full voice which was faintly recorded on the tape, perhaps because the recorder was across the room. Forensic analysis has confirmed this whispered conversation in the background to be:

“Whisper #3” takes place on page 391, Conversations Book #36, Nov. 10, 1977. Someone speaks four words in Bengali, after which Jayapataka Maharaja (it definitely is his voice) says what sounds to Mahabuddhi and many others as “POISON ISHVARYA RASA.” [(((mp3-audio)))]

SRILA PRABHUPADA: TO ME?

VOICE: (whisper) GET READY TO GO.

When one listens to this part of the last tape recordings several times, it becomes more clear, and the most heartbreaking section is where Srila Prabhupada weakly asks in great surprise, “To me?” It appears to be Jayapataka admitting to Srila Prabhupada that they had been poisoning him for a long time, which is confirmed by the cadmium hair tests, namely that is was in effect at level levels from at least February 1977 until Srila Prabhupada’s departure 9 months later.

This was some kind of “poison ishvarya rasa” or poisoning pastime, and that Srila Prabhupada should prepare to go, perhaps in a few days time. Totally shocking it is, but try as many have, there is no innocuous interpretation to the conversation. And it has been certified by the audio forensic specialist Jack Mitchell at CAE.

Therefore Jayapataka is classified as one of the primary suspects. He had the means, the motive, the opportunity, and the taperecording implicates him as well. Jayapataka was also situated right next to the tape recorder when the whispers, “The poison’s going down” and “The poison’s in the milk” were spoken, as indicated by the volume of his voice before and after the whispers. How could he be right there, within a few feetof the whispers between Tamal and Bhavananda, and not know what was going on?

On July 15, 1999 an article was posted on vnn.org by Radhapran das, Vice-president, Bukit Mertajam Temple in Malayasia:

“Amidst the various opinions made regarding the alleged poisoning of our beloved spiritual master His Divine Grace A.C.Bhaktivedanta Swami Prabhupada, H.H. Jayapataka Maharaja has made several very significant comments during his recent-most tour of Malaysia in June. During a private darshan at Bukit Mertajam on 12 June 1999, Bhaktin Mala, a local devotee, put forth questions to Jayapataka Swami on the poison issue.

Also present during the darshan were other local devotees such as H.G. Krishna Parayana das, H.G. Guna Avatar das, their respective wives, etc. In reply, Maharaja indicated that Srila Prabhupada had been close to the Gaudiya Matha during his final days on the planet and had taken food from them. He even went on to remark in his own words, that the Gaudiya Matha might have poisoned Prabhupada by saying: ‘they might have done it.’“

Thus a prominent GBC and ISKCON guru, Jayapataka Swami, went on record as admitting that such a poisoning was possible, where as the official ISKCON position has been one of flat denial. If the Gaudiya Math was able to poison Srila Prabhupada’s food, it would have been right under the noses of Bhakticharu and Tamal, who were responsible for security in this area. But, the rest of the article wonders, how could those poison whispers be attributed to the Gaudiya Math when Tamal, Bhavananda, and Jayapataka’s voices are recognizable in the three whispers?

It is noteworthy that Jayapataka did not enter any statement into the official GBC poisoning denial book, Not That I Am Poisoned. He must have been asked to do so, and he must have declined, thinking better of doing so. Why should he say anything, after all?

Around 1998, due to many complaints from many devotees, and following a committee investigation, Jayapataka Swami was CENSURED or reprimanded (given a warning to make changes), for not chanting his daily japa of 16 rounds on his beads, and for poor sadhana in other ways as well. Jayapataka also instigated by his activities that the GBC had to rule that ISKCON initiating gurus may only allow their birthday celebrations once a year, because he was constantly travelling around the world where his disciples would arrange a Vyasa-puja birthday celebration at each location. The result was constant celebration, year-round. This disturbed many devotees who saw this practice as a continuation of the zonal acharya era practices. He was also accused of constant travel so that devotees would not notice his lack of sadhana.

“Maharaja, when our Srila Prabhupada left, then he has given instruction that for initiating and carrying on the sampradaya there would be eleven- in the beginning, he appointed eleven devotees, his disciples, to be initiating spiritual master or to accept disciples and in the future thatnumber would also be able to be increased.” (Jayapataka to Sridhar Maharaja, March 1978)

Of course that was a big, bold lie. There has never been any evidence produced since 1977 that Srila Prabhupada appointed anyone to initiate after his departure. And the GBC in 1990 admitted it was not true and apologized for the decade of zonal gurus based on that lie. Jayapataka boldly lied to Sridhara Maharaja and misled him into giving faulty advice and an endorsement of the unauthorised guru system that he and his cohorts had conspired to foist upon the general devotees.

We find Jayapataka to have been the most sly and clever of all the bogus initiating gurus, always carefully calculating his responses and actions, usually by being non-committal and vague. He is an expert and Teflon politician. He has a powerful astrological configuration to protect from death: he survived in 1990 a knife attack to his throat which circled half his head but missed his jugular vein by an eighth of an inch. Healso has so far survived a severe stroke which has paralyzed one side of his body. Thus there are explanations as to why Jayapataka just keeps going on… and on.

There have also been many incidences and reports of his fanatically inclined disciples in Bengal, with incidents of an unexplained and suspicious prison suicide, bomb explosions, beatings of perceived critics, and what is called the Bengali Mafia. Jayapataka has over ten thousand disciples, many who will do anything for him. We have not felt safe going to Mayapur ever since Srila Prabhupada departed, and especially since the Vedic Village Reviews of 1989-1993, what to speak of the book Someone Has Poisoned Me published in 1999.

“Similarly in this institution if there is a bad disciple he can burn the whole
institution into ashes." Srila Prabhupada Letter to Bali Mardan, August 25, 1970.

IN PURSUIT OF PRABHUPADA’S POISONERS

Email: srigovinda@gmail.com
Posted by krishna1008 at 6:37 AM