The Next Messiah is Gadi das -- of Mulberry Tennessee? 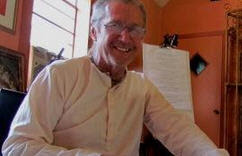 Murari Sevaka Asrama (Mulberry Tennesee) would not exist without the Grace of our entire Guru-parampara, The divine vision of Bhaktivinoda Thakura, our Paramagurudeva His Divine Grace A.C. Bhaktivedanta Swami Prabhupada, His Holiness Aindra Prabhu, and our Gurudeva, Om Visnupada Astottara-sata Sri Srimad Gadi dasa Prabhu, who have given their whole heart and soul to fulfilling the innermost hearts desire of Sri Caitanya Mahaprabu. This page is dedicated to Their glories.

[PADA: Who knew? According to their own web site Gadi Dasa is another GBC certified guru, the Om Vishnupada Messiah of the Jagat? He is another GBC authorized diksha guru who can absorb sins like Jesus? And he does not want us to criticize Narayan Maharaja: the biggest cheer leading defender of Tamal and the GBC's molester messiah's guru project; which is credited with: banning, beating, molesting and assassinating folks? And maybe poisoning?

Wasn't Gadi Dasa a big supporter of making Jayapataka the next acharya? And isn't this killing a number of these people like JPS, or at least making them extremely sick, because they are not qualified to absorb sins? 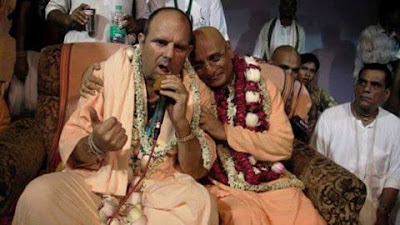 Absorbing sins like Jesus -- how is that working out folks?

Bhakti Caru swami: is he another person encouraging neophytes to absorb sins, and suffer terrible results?

Did we forget to mention that Srila Prabhupada does not agree with Narayan Maharaja's idea that we never fell from Krishna's leela? And that the GBC wrote position papers saying no one should associate with the NM clan for all these reasons and more, but Gadi is openly advertising this fellow on his "ISKCON" authorized web site? But if some "Prabhupada folks" try to use the name ISKCON to advertise Srila Prabhupada, the GBC sues these folks in the Supreme Court of Delhi. The ISKCON name can only be used to advertise false gurus, and not the real guru?

And NM is simply another person who encouages neophytes to take sins, which causes them to get sick, fall down and die prematurely? Did we forget to mention the GBC buried the body of a known sexual predator in the holy dham, and they are encouraging people to worship that dead lusty dog's carcass as a type of messiah from heaven? And there is a "stern warning" on Gadi's site, we cannot talk to Gadi about any of this? He will block all converstations related to these topics and keep us away from his "ISKCON" project?

In our current conversation with a media person, we are discussing that it seems to be illegal fraud to use the name of ISKCON for "corrupting the morals of minors," by telling little children that God's successors are often illicit sex, drug addicts, and sexual predator debauchees -- who might also be criminals who orchestrate murders? Why would we want little children to believe that the chain of messiahs from God in heaven often contains sexual predators and criminals?

Anyway! If Gadi and / or his associates have an explanation for all this, send it to angel108b@yahoo.com. Thanks! ys pd] 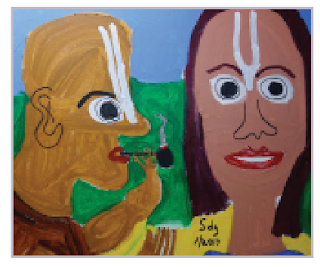 What is going on inside the head of these messiahs from heaven?

And as for promoting NM's false idea that we were never with Krishna:

We fell from Krishna's association --

"Dr. Mize: The question that bothers me in part is, then, why would the soul... Because I understand your conception that the soul is part of the spiritual sky originally, or part of God, and it somehow falls out of this blissful condition due to pride, much like the Christian thesis that the devil fell out of heaven due to pride. And it seems puzzling why the soul would be so silly, so foolish, so insane, as to do such a thing.

Prabhupāda: That is his independence.

Prabhupāda: He falls down.

Prabhupāda: He falls down on account of his independence. Just like you have got independence. You are sitting here. You can go immediately. You may not like to hear me.

Prabhupāda: That independence you have got. I have got also. I may not talk with you. So that independence is always there. Similarly, as part and parcel of God, the..., it is the duty of the soul to be always engaged in the service of the Lord.

Prabhupāda: In the service of the Lord.

Dr. Mize: Service of the Lord.

Prabhupāda: Just like this finger is part and parcel of my body. Whatever I am ordering, it is immediately carrying out. I say, "Make it like this," he will..., it will do. So... But this is dead matter. It is acting mechanically. The brain directs immediately the finger and it acts, like machine. This whole body is just like a machine, but soul is not machine, mechanical part. It is spiritual part. So therefore, as I am directing the finger, as being machine, it is working, but if somebody else, a friend or servant, I may direct him to do something, he may not do it. So when the soul misuses the independence, then he falls down. That is material life. Material life means misusing the independence of soul. Just like a son. A son's duty is to obey the father. But he may not obey. That is his madness. So when the soul, misusing the independence, becomes mad, he is sent in this material world.

Dr. Mize: It is puzzling to me that one would be so foolish.