(ISKCON) Feed back on Sudarsana dasa saying ritviks are right ...

Yuga Avatar Das The problem with your ritvik mentality is that your small team profusely causes offenses to other devotees. Only accepting one ''pure devotee'',when this attitude is not supported by Srila Prabhupada!


PADA Thanks Yuga, Sankarsana dasa is one of your gurus, and he says, the ritviks are correct, acharyas do not fall down. I hope you are not saying you are not accepting your own guru? Your guru Sankarasana dasa says we are right, and now you are apparently rejecting even your own gurus? ys pd


PADA Dear Akruranatha, Sankarsan is now saying he is ageeing with the main idea of the ritviks, that the pure devotees do not fall down. He is repeating and agreeing with our main idea, why not give him some credit? Are you saying he is wrong to be saying pure devotees do not fall down (our whole idea since 1977)? As soon as we glorify a devotee, you attack us, what is wrong with you? Can't you tolerate a devotee being given credit?

Yes, he agrees with us, that is what we have said for the past 30 years. Why is that not honest? I showed people the link where he is saying what we said all along, that pure devotees do not fall down, on HIS OWN SITE! I did not make anything up-- follow the link, that is what he says! Moreover, why are you saying Sankarsana's statement is "politics"? Shastra is not political?

He is NOW saying what we have said all along, so yes, he is agreeing with us. That also means he agrees with the second idea we have, that these post 1977 gurus are agents and not acharyas themselves, because they are falling down left, right and center. By the way, just after your friend Badrinarayan dasa recently said your gurus are always "crashing and burning," now Lokanatha swami is saying that the GBC gurus are many times having not only falldowns but indeed often have "black spots," so he too is also agreeing with us: that their gurus are not pure devotees, they have "black spots" (major impurity) which is what we said for the past 30 years. Why not give credit where credit is due? These folks are waking up, why not cheer them on? Amazing, as soon as we say someone is making progress, Akruranatha is begrudging them! ys pd 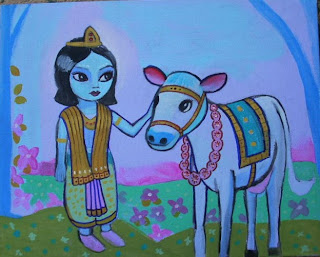