Rocana: Repair and managing of the acharyas (Update) 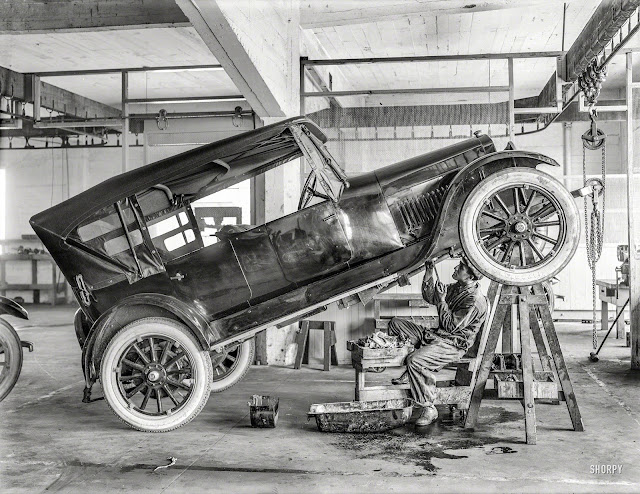 Acharyas are like breaking down cars that need repair, reform, rectification, censure etc?

[PADA: Recently the GBC "appointed" some of their own disciples as the "guru successors" to themselves. The qualification now is?

Wait a minute, they have already produced so many rogue acharyas who do their own thing and they do not follow the GBC? How can acharyas be one minute as pure as God and the next "not in good standing"? If the qualification is that one has to follow the GBC, why are so many of their gurus (ok like Jayatirtha, Hansadutta, Hrdayananda, Romapada etc.) not following the GBC?

*** Does Hrdayananda follow the GBC?
*** Is Satvarupa's art approved by the GBC?
*** Does the GBC endorse the various programs of car poojas, marriage hall productions and demigod pooja etc. going on in various ISKCON's?

When Jayadvaita says the GBC guru sampradaya contains some people engaged in illicit sex with men, women and children, why do so many folks tell PADA, this is NOT a GBC approved statement? Who is in charge of approving their statements?

Bhakti Vikas swami says Radhanath's books are bogus, does the GBC endorse his books or not? And so on!

Sorry, allegiance to whom, or what?] 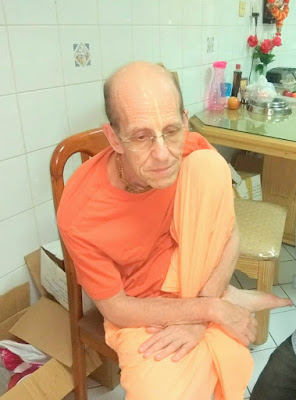 [PADA: Right, Rocana was one of the 1986 leaders of the "50 man committee" of the "guru reform." He thinks acharyas are usually deviants who need to be: voted in, censured, suspended, rectified, reformed, controlled, monitored, managed, removed, fixed and repaired etc. So the acharyas are sort of like my former broken down old Volkswagen beetle, you'd need to take them to the "guru repair shop" on a regular basis since they are often failing, breaking down, maybe the engine explodes, and they are collapsing on the highway.

The acharyas are like breaking down old Volkswagens? Really?

The acharyas need rectification for deviations?

Where does Srila Prabhupada say that the acharyas are subject to the GBC's /  Gaudiya Matha's / Rocana's "rectification procedures"? This is the problem with the Hanuman (Croatia) / Rocana / Torben / Ajit Krsna / Kim Moller / post-1977 GBC / Gaudiya Matha's acharya's process, they think acharyas are fallible conditioned souls who need fixing and repairing all the time.

This is one of the ten offenses, to consider the acharyas are ordinary mundane men (who need correction and reform). We do not rectify the acharyas, the acharyas rectify us!

This has no basis on any shastra, ... "the acharyas shall be subject to rectification procedures." And the GBC / Hanuman / Torben / Ajit / Rocana are the persons who will correct and rectify God's successor gurus? Where did Srila Prabhupada say GBC / Rocana / Torben / Hanuman, or anyone else, would be in charge of rectifying the acharyas?]

We request that the GBC please adopt all of the resolutions we are now proposing. We further request that this be done during this spring festival. These rectification proposals should not be promised verbally only, but should be put into written form for distribution to all the devotees in our movement.

1) Each newly-appointed initiating guru must specifically state whether he is on the paramahamsa, full-realization platform or whether he is a madhyama-guru. (as authority for this, we cite that Srila Prabhupada even informed karmi media representatives as to what his topmost platform of realization was).

Why does Rocana say that gurus are "newly appointed," when Srila Prabhupada says gurus are not appointed?

Who appointed Rocana's "newly appointed" gurus in the first place?

Where is Rocana's guru voting and guru appointing process described by Srila Prabhupada?

If the GBC members are defective, how can they "vote in" a pure person from within their group?

Rocana's guru lineage already contains illicit sex with men, women and children, and the people voted into his lineage might be paramahamsas or madhyama? Why would a paramahamsa want to be voted into such a lineage? How can debauchees vote in parampara gurus?

Where does Srila Prabhupada say the GBC will be making "newly appointed" acharyas, when he said the Gaudiya Matha failed from this deviation?]

2) It should be stated that a number (the word minority should not be used) of Srila Prabhupada's initiated disciples are dissatisfied with the current process of new guru worship and it's philosophy, feeling that there are deviations in it from sastric and sampradaya standards.

3) Pressure tactics of any sort used against initiated disciples of Srila Prabhupada who wish to question any newly adopted procedures according to guru, sastra, and sadhu, must be condemned and forbidden by the GBC. Analysis should instead be encouraged, not discouraged.

[PADA: This is foolish, we should "appoint" and annoint "new gurus," which allows them to make sub-violent personality cults, this should be allowed. Then, we wonder why dissenters are being banned, beaten, and even assassinated?]

4) All of Srila Prabhupada's initiated disciples who are not definitely known (suspicion is inadequate) to be breaking either the four rules and regulations or their vow of chanting 16 rounds, and who do not conduct themselves in any abominable manner while on temple grounds, must be given full facility to visit any of ISKCON's temples for attendance at any regular functions.

5) Any concept that Srila Prabhupada is dwindling within ISKCON as the sampradaya acarya, and therefore the center, must be disowned, and action must be immediately taken to stop such offensive misconceptions.

[PADA: But Rocana is a leader of dis-empowering Srila Prabhupada by saying he is the posthumous, post samadhi, post mortem acharya, and we can no longer worship him, we have to worship Rocana's rubber stamped "newly appointed."]

6) The process of public guru-puja in the temples must be written on paper, and it should be noted that guru-puja must always be wholeheartedly performed by Prabhupada's disciples for him at that time.

[PADA: Rocana already said that he wants people to place the photos of the new gurus on the altars to offer them the bhogha, where was this process authorized by Srila Prabhupada, a conditioned soul shall be offered bhogha?]

7) It must be clearly stated that Srila Prabhupada is the sampradaya acarya for ISKCON eternally, and that no disciple should ever attempt to usurp his title of "Srila Prabhupada".

[PADA: Wrong. Rocana says that his newly appointed people are sampradaya acharyas. He has usurped the post of acharya and given it to conditioned souls.]

8) The temples which Srila Prabhupada left to ISKCON when he departed this planet should be considered to be Prabhupada's temples, meant for his primary worship, along with the Deity.

[PADA: Wrong, Rocana says the worship of Srila Prabhupada is the bogus church of ritvik and we still need to offer bhogha to the appointed gurus, which Rocana is going to be in charge of appointing?]

9) It should be clearly stated that an initiate of Srila Prabhupada does not necessarily require any instructions from any source other than Srila Prabhupada and the sastra in order to perform devotional service to his spiritual master and advance in Krsna consciousness. Cooperation in service with appointed Godbrothers is to be brought out not by any forceful means, but by encouraging voluntary desire to cooperate via the ISKCON appointed authorities in their example.

[PADA: Where were we told to appoint our God brothers as the next Jesus?]

10) Any initiated Vaisnava of Srila Prabhupada who is leading a saintly life in Krsna consciousness and is giving bonafide instructions should be understood to be a guru, and, as such, a representative of Prabhupada and Krsna.

[PADA: Wrong, Rocana says the ritviks are bogus, because we do not worship his illicit sex acharya lineage. He says we have to worship a lineage that contains people who are NOT FOLLOWING.]

11) Any vindictive insults hurled at any initiated disciples of Srila Prabhupada by authorities in a position to curtail or hamper the aforementioned disciple's devotional service should be immediately condemned by the GBC body and rectified. There can also be no unwarranted blacklists published and circulated within ISKCON.

[PADA: Rocana is often quoted by the GBC as their authority? They love his idea that the Prabhupada devotees need to be banned and declared as bogus.]

12) All studies of the Vedic sciences should never be discouraged but instead encouraged. This includes jyotisa upaveda (vedic astronomy and astrology), hasta and sariraka samudrika (palmistry), etc. A standard system of authorized and truthful research should be established and consulted in order to gain practical benefits from these great sciences. (It should be noted that there is a double-standard in last year's GBC resolutions which "do not condone" astrology, since virtually every GBC has at least one astrological consultant. This kind of duplicity must be abandoned. Also, it may be noted that nowhere in Srila Prabhupada's books will one find any statements against these Vedic sciences, but instead those infallible books contain many praises of these studies.

14) There should be no mandatory form of worship that an initiated disciple of Srila Prabhupada is obliged to pay to a new guru, save and except the respect required to all dandi gosvamis. All other respect must be voluntary only.

15) Srila Prabhupada's claim to fame should not be misconstrued to be the creation of the eleven rttvik acaryas. They are not the only servants and representatives of Srila Prabhupada.

16) The infallibility or absolute concept is not applicable to an initiated disciple of Srila Prabhupada when the new guru speaks.

17) It should be declared that no individual successor to or a group of successors to Srila Prabhupada was appointed by His Divine Grace.

18) The specific applications of the term "acarya" in relation to the new gurus are to be properly and authoritatively specified according to sastra.

19) His Grace Sridhar Swami Should be again consulted for further specific clarifications on all these new guru matters. Narayan Maharaj may also be consulted.

[PADA: OK, we need to consult the people who promoted the 11?]

20) Preaching endeavors are mutually exclusive from the management authority, given to the GBC. There should be an air of cooperation, of course, but never one of interference.

21) A Vaisnava Rajya Sabha consisting of objective, impartial, sastric authority should be established. This sabha should have specific qualifications in it so that any initiated disciple of Srila Prabhupada may become qualified to enter it. It should not be an exclusive, elitist organization, and it should not be who you know but what you know which entitles entrance into it's ranks. It should have a specific relationship of authority with other ISKCON authorities.

22) Prabhupada's maha-samadhi fund should immediately be filled with all required funds in order to start opulent and efficient construction on his samadhi promptly.

23) All illicit means of procuring money for the operation of the ISKCON movement must be curtailed completely and immediately.

[PADA: OK Rocana keeps saying we are going to have appointed gurus, and we are going to offer bhogha to their photos etc. which is what Srila Prabhupada says destroyed the Gaudiya Matha? ys pd] 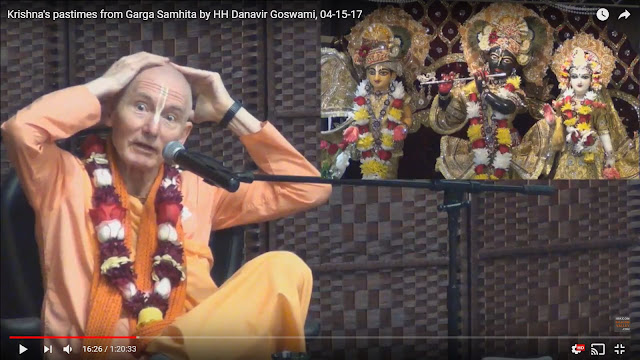 Rocana, urgent! Send over your guru repair hospital wagon right away, one of your patients is in severe need of a fix-it process!