A few words about Bangalore and Akshaya Patra 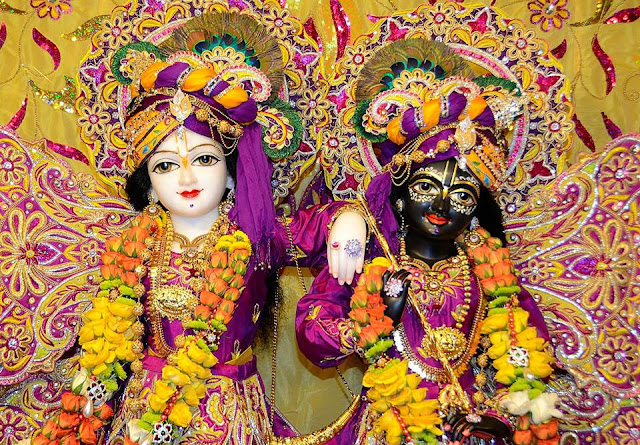 There are still some people out there criticizing the Bangalore and Akshaya Patra programs. Mainly, their first criticism is that Akshaya Patra (feeding poor school children) is "mundane welfare work."

ALL Krishna devotees need to have an engagement in the material world doing at least something, and clearly MOST of the current (or expatriate) ex-ISKCON-ite devotees -- who did not work on some project like Akshaya Patra then ended up -- engaged in a corporate job working for a mundane company. Thus -- almost cent percent of the "ISKCON circle" of devotees are NOW living outside the society and are working some form of a -- "mundane job." That includes most of us.

So even if we assume Akshaya Patra is a form of mundane welfare program, what better "mundane welfare program" are the mass of current or ex-ISKCON-ite's devotees doing? For example a devotee sent me a photo of an ISKCON farm, where the farm is neglected and falling apart, self apparently the people currently living there have jobs in the nearby city. And thus they bought fancy cars to get to the city -- and to their jobs. Is this type thing doing better service to Krishna? And this helps the mundane or otherwise "welfare" of others, how?

So the "mundane jobs and fancy cars / commuting to work program" is going forward nicely, the farm is -- not. OK so the mass of devotees are -- not -- doing so much devotional activity, or even mundane welfare activity. As one devotee said, why not just be honest and move to the city instead of making pretend this is a self-sufficient farm program?

And as one ex-kuli told me, there are thousands and thousands of armchair experts -- aka self-appointed manager "devotees" giving all sorts of cheap shot advice, which amounts to -- "too many chiefs and not enough Indians" i.e. we need less critics and advisers, and less people thinking they are the big important managers, and more actual boots on the ground citizens making actual programs, like Bangalore is doing. Agreed!

And exactly why is the program of the mass of devotees working at a mundane job at a mundane company a better program? Now of course there are a few "full time preachers" like the Montreal devotees, and some book distributors here and there, and that is great, but this not going to happen on a really wide scale basis at present for various reasons. Of course we congratulate and encourage any full time preaching, that is highly needed. Krishna says He blesses the preachers more than others, and that is why getting such Krishna blessings is so rare these days.

However! The manifold problems of the ISKCON society are simply NOT going to be solved by attacking Bangalore or Akshaya Patra, this is a much bigger issue that would require cooperation from thousands of people. Didn't anyone notice that almost all of these "outside" devotees with mundane jobs are not producing much preaching effect, if any? As one devotee said "at least they are working legal jobs, and no longer creating more criminal bad publicity." Swell!

And we could not help but notice at the post-1977 ISKCON "Sunday Feasts," a lot of the devotees (men especially) compared notes on their various "karmi" jobs, opportunities in job training, money making ventures, getting food stamps, etc. because their jobs / income has become an important part of their post-ISKCON lives. Of course most of these people had little to no interest in our idea of re-establishing Srila Prabhupada as the acharya, and a lot of them were just going along with the GBC's bogus guru's program by omission or commission.

Lets also not forget -- a good amount of the ISKCON / ex-ISKCON circles of devotees ventured off into criminal money making programs -- like making bogus charities that collected for the blind, selling T-shirts at the wharf, etc., or worse selling drugs, or worse even in some cases -- robbing banks. Again, is this a superior program? So the Bangalore folks also left the official corporate GBC managing structure, but they at least did something positive. Bhakta das for example became a king pin distributor of designer drugs components, and he was busted for selling millions of dollars of these products (and this was in the newspapers giving us a bad name as well).

Akshaya Patra is doing really nice charitable work, and as such, it is being recognized by the biggest leaders of India like Narendra Modi etc. at the same time, this program is giving Krishna and His devotees a good name wholesale. What exactly is the harm of doing that? So it would be better that Akshaya Patra is shut down, and these Akshaya Patra devotees joined the main mass of ISKCON ilk and orbit folks and they should -- get a karmi job?

I fail to see how this would improve things?

So the Akshaya devotees are clearly doing something superior to the mass of many / most other devotees, they are making a nice program that is getting widely recognized as doing good for those in need. That has to be a plus these days -- after decades of bad PR news for Krishna's devotees? In any case, I still do not get it, devotees should not be working for Akshaya Patra, they should be doing the same as most other devotees have done, and start working for a mundane corporation? This is not going to help the situation?

At the same time, the Bangalore program is making really nice temple programs, and these are some of the best deity functions going on anywhere in and around ISKCON. While many other official ISKCON GBC programs struggle with sufficient manpower, or in some cases they have little ability to collect sufficient funds to provide basic things like deity garlands and temple repairs, meanwhile the Bangalore temples and deity programs seem to have plenty of people and assets to do the temple functions, and do them nicely.

At the same time, the Bangalore program has taken the GBC's bogus gurus to task in the supreme court of India, to establish that Srila Prabhupada is the acharya. Again its baffling why so many people want to shut all this down, and let the bogus gurus go unchallenged? We should not even bother to legally challenge the bogus gurus of the GBC? OK that helps the bad guys and no one else.

Now some of the more vocal critics of Bangalore are folks like Sanat / Mukunda / Prahlad / Dayalu Nitai's HKC Jaipur ilk etc., and of course their pals on the GBC guru side. Yep, as soon as we had the GBC sued for changing the books Mukunda wrote to tell me "lawyers are all nonsense." Why do these people not even want us to have the legal rights to any original books? We need to have Jayadvaita's changed books as the only legally authorized editions? Sorry, most of the Bangalore folks are now educated on this issue and they are with us, they prefer originals. And we also should not take the GBC to court in India? Why are these guys always rooting for -- the wrong side?

Some of these folks made a web site saying PADA should stop all our activity such as: Publishing Srila Prabhupada's letters; Getting the last will of Srila Prabhupada out of a bogus guru's safe and promoting that document; Making copes of the appointment tape to make that issue public; Publishing the poison tapes; Financing and publishing Sulochana's writings and so on, and we should "get a better job than driving a taxi." Its an apparent obsession with all these folks, they want everyone to get a better karmi job?

Did we forget to mention, these same people told me we all need to listen to Bhakta das, the biggest cheer leader of the GBC's gurus like Radhanath? OK so the program that is clearly harmful to children, and which generates $400,000,000 lawsuits -- needs to be supported and promoted, while programs that factually help feed little children needs to be halted and stopped. OK so their basic idea is always the same, i.e. children get jackbooted in the head?

Worse, these guys told me that saving hundreds of children from abuse is a terrible idea, same thing the GBC's guru folks told us? Fine except! Why do children always have to end up suffering in these guys scheme of things? If there is one thing we need to stomp out in this universe, its helping children eat nicely, while many of these critics sit around munching on giant feasts for themselves -- because they made sure they would eat nicely.

In sum, the critics seem to take great care of monitoring and supplying their own eating, but they are self-evidently envious that others are also eating, especially children. Did we forget to mention that Prahlad das (Paul Coats UK?) told me that Mukunda's Hitler and Illuminati videos program is great because "it gets lots of hits"? And this is helping us along because ---???

Sorry, these items do not seem like the superior path forward. A number of devotees have wrote to complain to us that these people are simply another off shoot deviation, even worse than the GBC, because at least the GBC does not tell us to join the Third Reich. Of course the GBC discredits Bangalore for many other reasons, mainly -- that they do not accept the GBC's hokey gurus. Do any of these folks have a superior program and if so, where is it? And whatever it is, its not wide scale or we would not even have to ask where it is?

Anyway, the practical way forward is -- to conduct factual programs that are actually functioning and managed sensibly, and they are making temple programs, distributing books, making devotees, educating children in Sunday schools, and so on and so forth. These are all things Srila Prabhupada wanted. And the Bangalore folks have made these programs very successful in India and gradually more are being done here in the USA, and we need more of these programs where people are able to congregate and perform group "samkirtan" or congregational chanting of the holy name.

If anyone else has a better plan to create more of these types of things, they should manifest that now and show us how things should be done better.

It is the opinion of PADA that after 100 years from now, these critics and their ideas will be long lost and gone in the dust of history, because they will have no program to continue their process, whatever it is. The only programs that will exist at that time will be the temples and programs that people are making now, that will continue into the future because a temple is a generational process.

Temples and programs continue for hundreds, perhaps thousands of years. Nothing else that these critics are doing will stand this test of time. And if some folks want more samkirtana, original books, more temples etc. then do it!

My ex-gurukuli friend is correct, too many armchair advisers, to many chiefs, not enough Indians. The real workers will build something while the self-appointed advisory committee will not even exist in a few decades. Yup! Hee hee! ys pd