LOCANANADA DASA (June 2012): It is said that one must choose a spiritual master and that by mutual examination, the disciple will be accepted by the guru when the guru sees that the disciple has surrendered to Krishna.

If someone joins the Hare Krishna movement, he will seriously hear and assimilate the philosophy and apply it in his daily life. He or she will follow the four regulative principles, chant sixteen rounds a day and engage in Sankirtana activity on a regular basis. Bowing down to offer obeisances, reciting prayers and worshiping the Deity form of the Lord — all in the association of other like-minded devotees — these are the characteristics of a sincere student of a bona fide spiritual master. It is my understanding that when someone comes to this point, he or she has accepted Srila Prabhupada as the worshipable spiritual master. In other words, when someone seriously takes to the process of Krishna consciousness, as taught by Srila Prabhupada, that student has recognized and chosen Srila Prabhupada as his eternal spiritual master.

The arrangement made by His Divine Grace for initiations to be conducted after he would enter samadhi was to leave these formalities in the hands of the senior disciples he named in the July 9th, 1977 letter.
There was no mention of them receiving worship either during or after the end of Srila Prabhupada’s lifetime. Neither was it mentioned that future disciples would have to choose the person who would perform the formalities of their initiation, or that the person performing the initiation would be the ultimate spiritual authority of the initiate and was empowered to take the initiate back to Godhead.

The choice of spiritual master is made when one accepts Srila Prabhupada as his deliverer and eternal guide. When the symptoms of surrender are present, the representatives of the spiritual master such as the temple president, GBC secretary or other senior devotees will recommend the disciple to the officiating acarya who will formalize the connection with the guru parampara by conducting the initiation.

I believe that when devotees say “Srila Prabhupada is my siksa guru and so-and-so Swami is my diksa guru,” they have not properly cultivated their relationship with Srila Prabhupada. They should have the same sense of gratitude and commitment towards Srila Prabhupada as those who were initiated by His Divine Grace during his lifetime. In fact, they may become greater servants of Srila Prabhupada than we ever were.

Let us remember that any vaisnava can be seen as guru, according to the Caitanya caritamrita. But the vaisnava must always remain meek and humble if he is to act as the representative of the great acarya. I have heard ISKCON gurus say at initiation ceremonies, “I will take you to Prabhupada and Prabhupada will take you to Krishna.” In this way, the initiator is taking credit for having powers greater than other vaisnavas as if only he could take the initiate to Prabhupada’s lotus feet.

How does a newcomer connect with the Founder Acarya? First of all, Srila Prabhupada said, “If you want to know me, read my books.” Secondly, according to sastra, a devotee can have many siksa gurus and all of them can and should help you attain the lotus feet of Srila Prabhupada. The ISKCON gurus have for all intents and purposes excluded their godbrothers from preaching to their disciples by implying that their services are not required, thus turning the movement into a personality cult jubilee.

The initiation system followed in ISKCON may appear to some to be bona fide, but how could it be, considering there has never been a discussion about the role of the officiating acarya, which is what Srila Prabhupada said he wanted instituted in ISKCON thirty-five years ago. ys LD 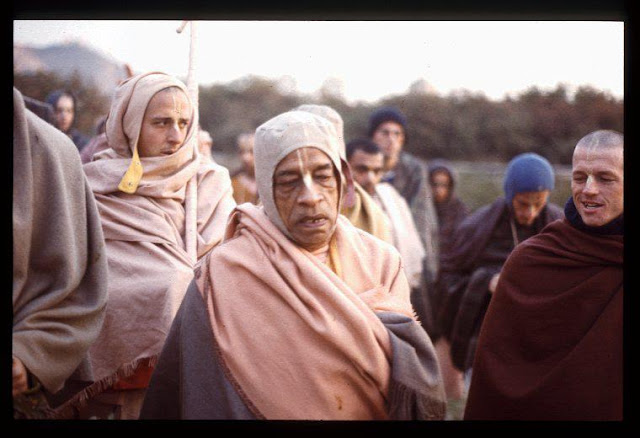