Prthu das couldn’t sell anything if his life depended on it. The only way for him to make his money is to take into confidence those who trust Srila Prabhupada, but are at the same time naive enough to accept the rotten leadership imposed on them by the K-GBC. They are easy prey untill they wake up and see the ugliness and evil around them.

When he was training his disciple in " leadership" Prthu told him: "Just go out, find and train a few young guys and they will go out and collect and maintain your family.You will not have to do a thing." Lucky enough for Patita Pavan das, he knew better. I was there and was shocked to hear that parasitic philosophy "preached" so openly.

In Vrindavan Prthu took sizeable deposit for his "ashram" from Laxman prabhu. He also signed the contract and swore in front of the deities that the transaction was sealed. Later on, Prithu changed his mind and "gave" the ashram to Iskcon and took off with Laxman's deposit. Needless to say, Prithu never returned a penny to Laxman and caused him unbelivable agony. That scumbag narcissist Prthu das has no shame and no remorse for his acts to this day.

Idiots like Panca-tattva das don’t care about such details. Book could be written about Prthu’s atrocities but who cares. Give a scumbag like Prthu das some power and he will just cause misery and ruin to others.

For years he was ripping us off and buying his expensive toys, traveling whimsically, and needlessly. If you wouldn’t give him money he wold extort it from you saying that you needed to find another guru etc. We slept in sleazy Taiwanese motels, eat Buddhist food just to get that bastard money for his easy going living lifestyle. Despite all that money filling his pockets, his own wife and children suffered immensely. (His wife wrote a letter of complaint).

He bought himself any expensive new toy that came around. Expensive health juicers that were costing thousands, new laptops every few months, and so much other garbage that is too hard to inventory now. Every time a new laptop came out he just had to have it. Any new health food freak fad that came around, he was in on it. He became so obsessed with the contents of his own excrement that it became a hot topic in all of his "preaching." Good old prasadam as introduced by Srila Prabhupada became "toxic" and tasting like a cardboard -- to His Royal Highness and Queer-ness Prthu das. You had to take your own enema, you had to talk about your own stools, or you were considered wierd and unhealthy to be with. You had to eat your sprouts and your dehydrated dog cookies and if you offered him a sweet rice offered to the Lord he would say it was very bad for you because it only produced mucus.

That fat hog used to gorge on decadent food all the time but all of a sudden he became health guru when he got hepatitis C, which he probably contracted while taking heroin or maybe he got something from his queer buddies. Such display of bodily consciousness I have never seen. Total bodily absorption. 24/7 -- 365. His rubber stamp given to him by the K-GBC was well deserved.

What enrages me the most is that he never told us before that he was practicing such a risky lifestyle before and that he was potentially carrying some serious diseases in his rotten body. One time when I refused to eat his hepatitis C infused "maha" he gave me such a severe chastisement that I had no choice but to take it. Almost everything was forced upon you with Prthu. He regularly used to meddle in and ultimately wreck people's marriages and even businesses. His pedophile disciples: Nitai Candra das, Gaura Kisore das, Navanita Chora das were all married off to unsuspecting ladies and none of us were allowed to say anything. Other queers like Vrindavan Chandra das were also united with girls who had no clue what they were getting themselves into.

When I finally had Nitai Chandra das cornered for mercilessly raping an 11 year old in the Philippines in 1998, Prthu das and Giridhari Swami exerted their K-GBC powers on me and prevented me form calling the cops. From then on Nitai went to molest well over 50 innocent young children under the auspices of his beloved queer Gurumaharaja, namely Prthu das. In 2004 Nitai admited to being a serial predatory pedophile in front of 50 devotees during one of the Satvatove courses.

The only reason he was able to do that was because Prthu prevented me form having him arrested 6 years earlier. Prithu could have also had him put to jail in Vrindavan in 1992 when he sexually abused his first known victims (2 gurukuli boys) at the time but his just sent him off to Puna and later to Taiwan to avoid taking the heat. Nitai ruined many young lives and we only have to thank Prthu das for it. Some of the Nitai’s victims were his own wife’s five year old brother and his own 7 year old sister and older brother. Had he been put behind bars when the were victims there to testify many innocent lives would have been spared. I hope that Prthu hears their screams every day while awake and while sleeping. Well maybe he does already since he requires handful of heavy drugs to keep himself sane like some of his fake guru buddies.

That is why I am saying: Wherever there is Prhtu das, there must be at least a dozen or so of predatory pedophiles and a few foggots to provide him with physical and ego massages daily. Ladies, don’t get married to his disciples and friends. Prthu will turn your life into living hell. Your children may get raped and you may contract hepatitis C.

He didn’t care that many of his foolish folowers had wives and children and that they could all get sick by eating his leftovers but thats what he is, a self-absorbed a** - hole narcissist worth every ounce of contempt. I hope that Panca-tattva das and the entire gbc gang have enough courage to break their bread and share in Prthu’s filthy saliva. Come on guys, you write the recipes (recipe for disaster that is), you may as well try them for yourselves.

Now I am not surprised AT ALL that Prthu das loved to listen to "Queen" albums. Freddy Mercury was his idol. He was also obsessed with the Lord of the rings BS and had just about every piece of Lord Of The Rings paraphernalia about it, and talked about it incessantly.

Those teeth (dental implants) that he proudly displays will become his lunch one day when people around him figure out his true nature. That is inevitable. Wherever he went, Ireland, US, India, he caused disturbance. All his projects failed. People left fried and disgusted. I just hope that some of our Russian brothers cop on soon take Prithu to task for his crimes.

I will keep repeating these facts untill the day I die. I just hope that some of Prthu’s former disciples will also comment here for the sake of saving others form being put in danger by this criminal. Thanks 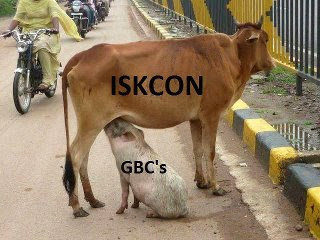