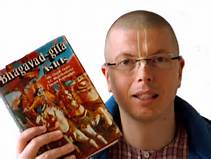 PADA: This is amazing. Ajit Krishna is complaining the GBC is banning some of the people complaining about the book changes (at Mayapura). Great! Of course its also good, Ajit is now complaining about Jayapataka's MAFIA, who is banning people who complain about the books changes. Oooops, which is why Ajit Krishna worships the Bhakti Vikas swami program, and he is a sannyasa disciple of the leader of the Mayapura Mafia (Jayapataka). Yes Jayadvaita swami is a deviant rascal for changing the books! Therefore lets worship the people who -- voted him as as a guru, or the other people voted in along with him?

Yep, we hate the books changes, that is why -- we worship the program that changes the books and bans the protest of the changed books! This has been PADA's problem all along, yes we all hate child molesting, that is why -- we worship the leaders of the child molesting infrastructure process, and we ban PADA for protesting. And Ajit also worships the GBC's gurus aka the members of the child molesting infrastructure program, and Ajit promotes the biggest hand maiden of the GBC's "voted in" guru process -- Rocana das?

Meanwhile Ajit Krishna bans PADA and he says -- we need to listen to Rocana, who is one of the "50 man committee" founding father members of the 1986 "ISKCON guru reformers" which: Continued to promote the original 1978 "appointed 11"  deviants (and maybe guru poisoners?) as acharyas in their parampara lineage; Which votes in MORE deviants if not sexual predators as their acharyas; Which reinstated sex with taxi drivers as their Vishnupada acharya; Which voted in Ajit Krishna's hero Bhakti Vikas swami as an acharya -- because he is the sannyasa disciple of Jayapataka, a founder father of the illicit sex with men, women and children guru parampara.

And BVKS sannyasa guru JPS is the leader of the Mayapura MAFIA? And is a person who has made strange whisper comments on "the poison tapes"?

And worse, Rocana's and Ajit's "reformers" excommunicated Sulochana which lead to his murder, and eventually lead to burying Kirtanananda in Krishna's holy dham of Vrnndavana, by Gopal Krishna and Radhanath -- two big leaders in the Ajit Krishna / Rocana "guru reform." Why does Ajit promote a "guru lineage" that buries sexual predators in the holy dham, and which creates a $400,000,000 lawsuit for child molesting? That is a guru lineage?

Did we forget to mention it is Ajit Krishna's "guru reformer" program which has been master minding the book changes program, headed by one of their "voted in gurus" Jayadvaita swami? Then Rocana writes his "ISKCON constitution" wherein he says his current "guru reform" GBC guru voting process is fine, we just need to tighten up the ADMINISTRATION, ENFORCEMENT and REGULATION of the rules and guidelines for Rocana's (deviant) acharyas. We need to administer Krishna and His acharyas? Rocana is the acharya police force?

And because PADA does not fall down and worship Rocana and Ajit's illicit sex with men, women and children guru program, and try to help them "make better enforcement" for controlling their deviant acharyas, we are to be banned! And that is also why Rocana bans us from contributing to his site for the past 20 years.

Rocana's "guru reformers" have not ever proven that acharyas are usually deviants who need administration, censure, admonishing, monitoring, suspension, removal etc. -- in the first place? Anyway notice, Ajit Krishna, Torben, Kim Moller, Hanuman Croatia and so on, they all agree with the Rocana process, we need to promote "guru reform" people like Rocana and his voted in gurus like Bhakti Vikas swami, because they are the co-founder fathers of the illicit sex with taxi drivers reinstating guru parampara, and they ban those who want to worship Srila Prabhupada.

And then these fools wonder why there has been BOOK CHANGES, never mind mass molesting, crimes, embezzling, and murders going on in their "guru parampara." Did we forget to mention, Bhakti Vikas encouraging people like Jayapataka to be diksha gurus and absorb sins, is killing people because they are being overwhelmed by taking sins. Yep, we need to ban PADA and WORSHIP AS OUR MESSIAHS the program of people who -- ban the complaints about book changes. ys pd 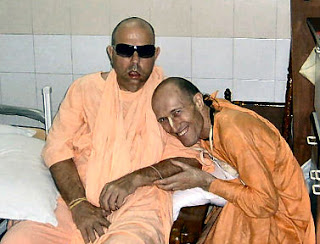 Keep taking sins, you are almost there!
Ummm, I mean dead?

Why does Ajit Krishna promote this bogus guru lineage and he bans people who do not worship his illicit sex with men, women and children (and maybe goats) guru lineage, and he bans those who want to worship Srila Prabhupada instead? ys pd